There were no fireworks on policy and the candidates largely refused to criticize fellow Republicans sharing the stage. But it was on style where the White House hopefuls in the second tier showed their strengths—and, perhaps more importantly, their weaknesses.

A pre-show of sorts to the main debate with the more familiar names, B Team of the GOP took turns telling their personal stories and promising to be a tough opponent against Hillary Clinton, the likely Democratic nominee. But some of the candidates took a measured tone with an eye for a long-shot general election against Clinton, while others tilted far right in the hopes of inspiring caucusgoers in Iowa and voters in New Hampshire.

Former technology executive Carly Fiorina, who for years wowed shareholders with her polish and has become a favorite in early-nominating states, had her practiced rejoinders at the ready when questions came her way. While she pushed a conservative message, she was careful to calibrate her zeal in a way that would do her little harm if she is the GOP nominee or—perhaps, its vice presidential nominee. “We need a nominee who will throw punches, not pull punches,” she said. “I can win this job. I can do this job.”

Former Pennsylvania Sen. Rick Santorum, by contrast, likened the Supreme Court’s recent ruling expanding same-sex marriage to all 50 states to the ruling that kept slavery in place. “This is a rogue Supreme Court decision,” Santorum said of this year’s ruling. It was a surefire way to inspire Christian conservatives in Iowa, a place where he won the 2012 caucuses but where his supporters seem to have moved on.

Others fell somewhere between the pair on a scale of how far they were willing to cast themselves as deeply conservative figures.

It’s a tough balancing act for this cast of hopefuls. They are struggling to find a breakout moment that wins them widespread publicity in a centrist nation. Yet leadoff states Iowa and South Carolina are quite conservative, and without strong showings there, their campaigns end.

For some, they simply retreated to what voters already know about them. “Whatever it takes to defend our nation, I will do,” said South Carolina Sen. Lindsey Graham, a foreign policy hawk who has staked his campaign on fighting America’s enemies. Former Texas Gov. Rick Perry had his plainspoken wit with him; on a proposed deal with Iran, he vowed to shout “not only no, but hell no.” They were well-rehearsed lines, but hardly the type of that fixes serious problems with their uphill campaigns.

These candidates failed to win a coveted spot in the first debate of this election cycle, despite having credible resumes. Yet when compared with the fiery frontrunner Donald Trump, deeply-funded Jeb Bush and a raft of tea party darlings, they just could not break into the pack.

The main event was slated to take place hours later on the same stage in Cleveland. But these candidates were auditioning to a smaller television audience and an almost empty arena for what was being billed as the Happy Hour Debate.

No one broke through a clear winner and there was no immediate reason to open bottles of bubby. For these candidates, their campaigns now face an ever steeper climb.

Fiorina delivered a perhaps the best line of the night when asked about Trump. “I didn’t get a phone call from Bill Clinton before I jumped in the race,” she said, hinting at reports that the former President phoned Trump as he was launching his campaign. “Did any of you get a phone call from Bill Clinton?” she asked her rivals. “I didn’t. Maybe it’s because I hadn’t given money to the foundation or donated to his wife’s Senate campaign.” In her way, she was suggesting Trump, who has topped the polls, did not really belong on a Republican debate stage.

Trump—or questions about him—was a major factor in the debate. Or, as one moderator described him: “the elephant that is not in the room tonight.”

It left many of the second-tier candidates struggling to make the case to continue their campaigns.

Standing across the stage from former Virginia Gov. Jim Gilmore, his one-time peer George Pataki offered up perhaps the most telling line of the night. “With all the candidates, why me?” Pataki asked rhetorically.

For the six others on the stage, it was a question they were going to have to answer ahead of the next debate scheduled for next month at the Reagan Library in California. If, of course, they make the cut for that one. 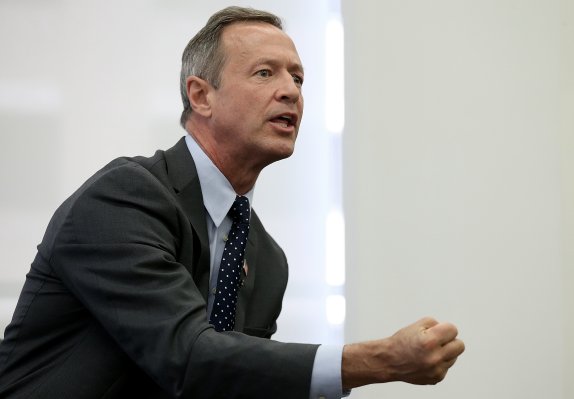