With the first anniversary of the killing of Michael Brown this weekend, America needs to know how the tumultuous events of the last year have affected your stance regarding the needs of the black community. In order for African Americans to determine this, please select one of the following that best defines your current philosophy: a) Black Lives Matter, b) Black Votes Matter, c) Black Entertainers and Athletes Matter, d) All of the Above, e) None of the Above.

If you chose anything other than “a,” you probably don’t deserve any votes—black, brown, or white. You might get votes by default of being less bad than the alternatives, but getting votes that way isn’t much of an endorsement of your leadership abilities. And making things better for African Americans in a substantial and meaningful way in this country is going to require an outstanding leader.

In ancient Greece, a touchstone was a dark stone, such as slate, used to determine the purity of gold ore. Today, the phrase “Black Lives Matter” has become a political touchstone in determining the basic qualities of a leader: courage, vision, and intelligence.

Courage is required in order to speak out in support of “Black Lives Matter.” So many Americans misunderstand the meaning of the phrase that there’s an outraged backlash against it. The popular misinterpretation, encouraged by some politicians seems to be that by saying “Black Lives Matter,” African Americans are seeking special attention. In fact, it’s the opposite. They are seeking their fair share of opportunities without receiving the “special attention” of being profiled, arrested, imprisoned, or killed.

Many of you candidates—including the only black candidate, Ben Carson—have used the more mundane phrase, “All Lives Matters,” which appeases racism deniers. This is cowardly because it completely ignores the problem and panders to the least politically informed constituency. Americans are used to candidates competing to see who can best ingratiate themselves to the demands of reclusive billionaire backers and fringe groups, but this goes too far.

Most Americans are already in agreement that all life matters—it’s just that blacks want to make sure that they are included in that category of “all,” which so many studies prove is not the case. In the future, think of “Black Lives Matter” as a simplified version of “We Would Like to Create a Country in Which Black Lives Matter as Much as White Lives in Terms of Physical Safety, Education, Job Opportunities, Criminal Prosecution, and Political Power.”

Studies prove that the education system is biased in favor of white students: A 2014 U.S. Education Department survey concluded that students of color in public schools are punished more and receive less access to experienced teachers than white students. This leads to lower academic performance for minorities, putting them at greater risk of dropping out of school. Minorities are also on the short end of the job market: Unemployment among blacks is about double that among whites. One study found that job applicants with black-sounding names received 50% fewer callbacks than those with white-sounding names.

More important is the legitimate fear black people have for their lives. The killing of unarmed black men, women, and children at the hands of police this past year has been well documented in the press. We continue to see more names added to the list. A recently revealed video shows police shooting to death Jonathan Ferrell, who knocked at a nearby house for help after a car accident in 2013. The phrase “Black Lives Matter” isn’t just a metaphor; it’s a call for awareness of the literal danger to one’s physical body merely by being black in America. A danger that whites don’t share.

Presidential candidates must also have vision and intelligence. You have to envision an ideal America of equal opportunity and treatment for all and have an intelligent plan to actually move the country in that direction. Both qualities require an awareness of current political and social movements. Thousands recently attended a “Black Lives Matter” conference in Cleveland. A lot of the news coverage ignored the substance of the meeting, instead focusing on the more dramatic images of a transit cop pepper-spraying some people who protested the arrest of a 14-year-old black kid accused of being intoxicated. The following week, candidates including Hillary Clinton and Jeb Bush spoke at the National Urban League’s conference, an African-American political activist group that is larger and older than the “Black Lives Matter” movement. Why were there no candidates at the “Black Lives Matter” conference?

Part of the reason is that the discussion of race in America as a major talking point for this election has been derailed by the funhouse candidacy of Donald Trump. His unexpected popularity has sent many of you candidates into hiding so as not to offend his conservative supporters. You tried denouncing his rude, inaccurate, and bullying comments, but that only seemed to increase Trump’s popularity. Trump is succeeding at taking the Grumpy Old Grandpa approach: complain without offering practical solutions. It’s likely that his supporters are mostly the disenfranchised older, white, middle-class conservatives who already feel marginalized and invisible. Like Howard Beale in Network, they’re mad as hell and won’t take it anymore. They have this narrow window to be heard, and by supporting such an outrageously improbable candidate, their voices are coming through loud and clear.

What they fail to realize is that Trump’s outspoken opinions, which his followers consider refreshing, are mostly meaningless. As president he wouldn’t have the power to do much of what he claims he would do. That’s why he appeals to those who have little knowledge of how government actually works. Never mind that Trump’s statements reveal no specific policy or plan, or that he has no experience, and that his comments show him to be detached from the street-level problems of America. Or, most important, that the very people who support him will likely be the most hurt by his election. His popularity is similar to the Schwarzenegger Syndrome: Californians elected Arnold simply because he was refreshingly outspoken, despite the fact that he had no qualifications or job experience appropriate to running a state. In the end, despite Schwarzenegger’s bold talk and good intentions, some argue California was worse off when he left office. That is pretty much what we could expect under the Trumpinator.

With the nation focused on the Trump Distraction, the “Black Lives Matter” issue has been moved to the back of the bus. But don’t expect the issue to wait patiently for its turn in the spotlight. Take a look at this week’s Pew Research Center poll, which concludes that 58% of Hispanics and 73% of African Americans believe racism is a big problem. That’s two voting blocks. Perhaps even more relevant is that 44% of whites agree that it’s a significant problem, which is an increase of 17 points since 2010. Finally, the most important finding: 59% of all those polled agree that the country “needs to continue making changes to give blacks equal rights with whites.” That’s up from 46% about a year ago. 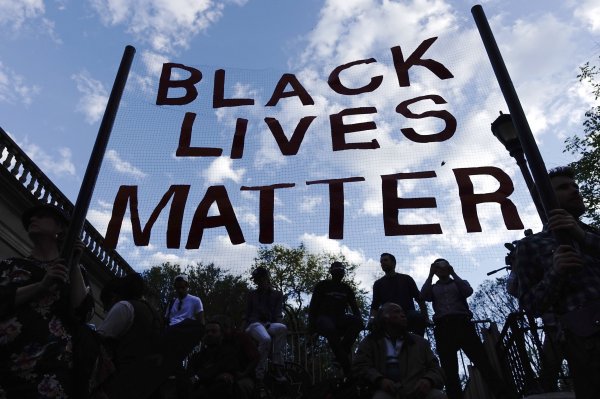