Debate success is a mix of skill, preparation and chance. The candidate who emerges victorious from Thursday’s debate will come down in large part to the questions Fox News pitches at them.

For their part, moderators Bret Baier, Megyn Kelly and Chris Wallace have vowed to pose tough questions. Here are the ones that each candidate doesn’t want to answer:

Donald Trump is leading the Republican field now, but he wasn’t always an outspoken conservative. Hillary Clinton attended his most recent of three weddings, and husband Bill Clinton joined for the reception. He has written checks to Democratic candidates and campaign committees. He backed the requirement that all Americans be required to get health insurance, an idea at the core of Obamacare. So the obvious question to the loud-mouthed real estate mogul: “Just 15 years ago you were pro-choice, supported single-payer healthcare and a 14% wealth seizure by the federal government. Now you are against those things. Sir, how can we believe that you aren’t really a Democratic plant sent into this race to soften us up so your friend Hillary Clinton can be President?”

Jeb Bush has made education reform one of his signature policy issues. He was an early and vocal backer of the voluntary Common Core education standards, which enjoyed broad Republican support before more recently coming under fire from grassroots conservatives. GOP Govs. Chris Christie, Scott Walker, Bobby Jindal and Mike Huckabee have all abandoned their support for Common Core. Now Bush is the lone holdout for Common Core, though its toxicity is plain enough that he avoids using the term and couches his endorsement as support for accountability. The question for Bush: “How do you respond to Republican voters who view your support for Common Core as an attempt to nationalize education?”

It’s hard to pin down Scott Walker‘s position on immigration. Ten years ago, Walker favored comprehensive immigration reform. In 2010, he criticized Arizona’s controversial immigration law, only to quickly reverse his stance. In 2013, he supported the Senate’s bipartisan overhauls of the U.S. immigration system, which included a difficult pathway to citizenship. Now he opposes the same citizenship, and appears to have staked out an even tougher position, calling for reducing levels of legal immigration, too. The question for a candidate who casts himself as a principled fighter: “As President, what would you do with the estimated 11 million undocumented immigrants currently in the U.S.? Do we simply have too many immigrants — here legally or otherwise — and can you guarantee us that your view today would not change if you are elected?”

When Mike Huckabee announced his candidacy for president in May, he boasted of passing 94 tax cuts during his two terms as governor of Arkansas. Independent fact-checkers questioned that figure, noting that he also raised taxes 21 times. The total net tax increase during his term was $505 million, leading the Cato Foundation to award Huckabee an F grade on taxes in 2006. “Can you explain why you chose to repeatedly raise taxes while governor of Arkansas?”

Ben Carson, a former pediatric neurosurgeon, enjoyed a groundbreaking medical career. Yet the first-time political candidate has not been put through the vetting that accompanies a White House bid. The conservative National Review looked at Carson’s connections to a potentially problematic health supplement company that has been accused of false advertising and conspiracy to commit fraud. The question for Carson: “Most Americans know you for your accomplishments in the operating room. But you’ve also promoted a company that has promised miracle cures for everything from cancer to multiple sclerosis to HIV/ AIDS, and you have no experience in elected office. What prepares you to be president?”

Ted Cruz frequently invokes Ronald Reagan’s 11th commandment: “Thou shalt not speak ill of another Republican.” Yet Cruz criticizes his colleagues all the time—including, just last week, during a remarkable speech on the Senate floor in which he accused GOP Senate leader Mitch McConnell of lying. “How does calling your party’s leader a liar square with your pledge not to attack fellow Republicans?”

He’s young and charismatic, a magnificent orator who doesn’t look like the typical white politician. Sounds like Marco Rubio, right? Well, the same was said eight years ago about another up-and-comer: Barack Obama. Many conservatives are not sure they want to bet on yet another first-term Senator with magnetic appeal and a thin resume. “Why, Sen. Rubio, should Americans risk another eight years of a learn-on-the-job President?”

On the eve of the debate, the man running Rand Paul’s super PAC was indicted for allegedly participating in an endorsement-for-pay conspiracy that occurred during his father’s 2012 presidential campaign. Paul also stood by an aide who was outed for writing neo-Confederate columns under the pseudonym “The Southern Avenger.” The question for Paul: “Given the people you surround yourself with, why should Americans trust your judgment as President?”

Chris Christie’s dreaded question is based on an answer he gave this week while campaigning in New Hampshire. “I’m a Catholic,” the famously candid New Jersey Governor said, “but I’ve used birth control, and not just the rhythm method, OK?” Awkwardness ensued. The question no candidate ever wants to answer, but one that is fair to ask Christie now: “Sir, can you tell us more about your birth control practices?”

On the campaign trail, Ohio Gov. John Kasich touts his stewardship of the Buckeye State and his role in crafting Congress’s last balanced budget. But in between political offices, Kasich went to work at Lehman Brothers, the investment bank whose collapse contributed significantly to years of economic malaise and soaring unemployment. The question for Kasich: “Were investment bankers like you responsible for the Great Recession?” 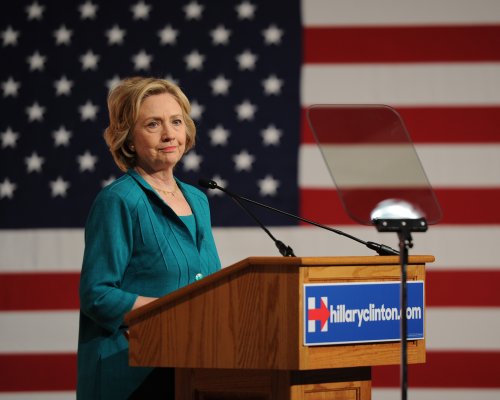 Democrats Will Hold First Debate in October
Next Up: Editor's Pick