When American-born actor Michael Peña was a year old, his parents were deported. They had illegally walked across the border from Mexico years earlier, and when they were caught by immigration authorities, they sent Peña and his brother to stay with relatives in the U.S. “It was quite a bit of a gamble for my parents,” says Peña, “but they came back a year later.” Peña’s father, who had been a farmer in Mexico, got a job at a button factory in Chicago and, eventually, a green card. Peña stayed in Chicago until, at 19, he decamped for Los Angeles to pursue his acting dreams.

This family history makes Peña’s latest role especially personal. In Cesar Chavez, opening March 28, Peña plays the labor leader as he struggles to organize immigrant California farmworkers in the 1960s. To pressure growers to improve working conditions and wages, Chavez led a national boycott of table grapes that lasted from 1965 to 1970 and is chronicled in the film. Chavez, like Peña, was the American-born son of Mexican farmers who immigrated to the U.S. “[Peña] understands this duality, the feeling of being born in a place but having a very big idea of where your heritage comes from,” says the film’s director, Diego Luna. “This thing of having to go to school and learn in English and then go home to speak Spanish with your parents.”

As immigration policy is hotly debated on Capitol Hill this year, Luna and others who were involved with Cesar Chavez are hoping the movie will spark new support for reform and inspire American Latinos to get involved. “The message Chavez lived was that change couldn’t happen without the masses being a part of their own change,” says America Ferrera, a first-generation Honduran American who plays the union leader’s wife Helen. Rosario Dawson, who co-founded the advocacy group Voto Latino, plays Chavez ally and labor leader Dolores Huerta.

Immigrant-rights issues have evolved substantially in the years since Chavez founded the United Farm Workers (UFW). Undocumented workers now make up a far larger share of the agricultural workforce in California than they did in the 1960s, according to Miriam Pawel, author of The Crusades of Cesar Chavez, published this month. Chavez was vehemently opposed to illegal immigration, believing it made strikes difficult to execute and weakened the union. He initiated a program in the mid-1970s to locate undocumented farmworkers and report them to immigration officials, Pawel writes. And despite his early victories, Chavez’s UFW union represents just a small fraction of those working on California farms today.

“Chavez’s legacy is not in the field, which is sad,” says Pawel. Still, she says, his organizing strategies, featured extensively in Cesar Chavez, have been adopted by other activists, including those leading the modern immigrant-rights movement. Chavez’s most important contribution may have been humanizing the Latino population for the American public. Farm laborers, many of whom barely spoke English, traveled across the country during the grape boycott, standing outside grocery stores to persuade housewives not to buy grapes and to spread the word about their plight. “They gave the boycott this very human face,” says Pawel.

“It was families talking to other families,” says Luna. “It’s about the power we have just by being who we are.” 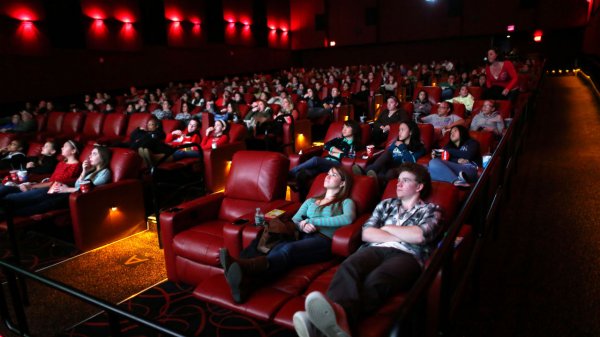 Movie Theaters Are Begging You to Come Back
Next Up: Editor's Pick