A grand jury opted not to indict Wilson, who recently gave his first extensive interview in months, saying he’s “not going to keep living in the past.” Activists are using the anniversary weekend to stage what they promise will be peaceful protests and vigils. Police are on alert for any sign that the anniversary could bring renewed violence.

But as the town tries to move on, what has changed and what hasn’t? Here’s a where-are-they-now guide to some of the people and issues on the ground.

Wilson, no longer with the police force, lives somewhere in St. Louis County. His exact location remains a closely-guarded secret amid continuing threats. Supporters have raised more than $500,000 for his legal defense and protection, but Wilson still hasn’t been able to find work, according to a profile in The New Yorker. “It’s too hot an issue, so it makes me unemployable,” he told the magazine.

A grand jury declined to indict him in the shooting, and federal investigators cleared him of any wrongdoing under federal law.

The people in charge

Michael Brown’s death briefly turned a number of city and state officials into household names. A year later, some remain in office after surviving the tumult of a national spotlight. Others have resigned and disappeared.

Other law enforcement officials have had a tougher time keeping their jobs. Ferguson Mayor James Knowles, for instance, has withstood countless calls for his resignation and even a recall campaign. Knowles said he would remain in his position to continue “bringing us together, moving us forward.”

But Thomas Jackson, the Ferguson Police Chief, resigned following a scathing federal report. He said the city needed “to move forward without any distractions.” Other Ferguson police officers and city officials also resigned after the Justice Department report found they had sent racist emails.

The Department of Justice launched two separate investigations following the shooting. The first, conducted in coordination with the FBI, investigated the shooting itself and whether Wilson’s decision to shoot Brown violated federal civil rights law. That investigation, which concluded in March, corroborated Wilson’s account of the incident and cleared him of any legal or civil rights violations.

The second investigation, which also concluded in March, looked at the Ferguson Police Department’s practices more broadly. Federal authorities found patterns of racial bias that included unwarranted arrests of blacks and use of excessive force. The city has since been in negotiations with the Justice Department to enter into a so-called consent decree, which would create formal guidelines for reform.

Many local businesses boarded up in the weeks and months following the fiercest riots, but hundreds of thousands of dollars in funding from local business development groups has kept most from closing permanently. They may not be flourishing, but they are surviving. In the first weeks following the clashes between protesters and police, the St. Louis Regional Business Council offered interest-free grants to dozens of local businesses, said Kathy Osborn, the group’s executive director—places like bakeries, restaurants and flower shops that might have otherwise closed their doors.

While small businesses may be getting by, the local government faces tough choices thanks to a sharp decline in revenue. Income from tickets—the DOJ report found systemic targeting of minorities as a means of raising revenue—is expected to fall by $1 million from the 2013-2014 budget to the 2014-2015 budget. The city’s total operating budget is about $14 million, Reuters reports. 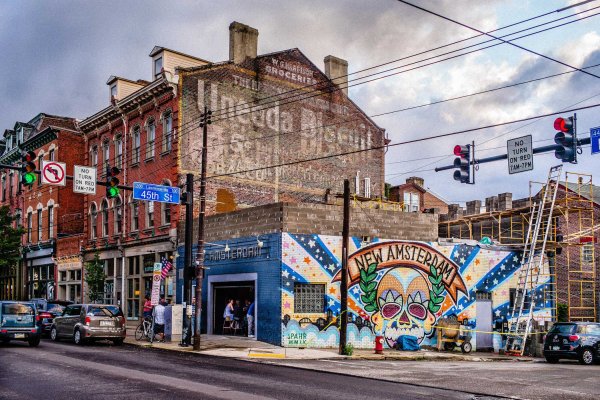 See Pittsburgh in 9 Photos
Next Up: Editor's Pick