Earlier this week, there were reports that friends of Starbucks CEO Howard Schultz were encouraging him to enter the 2016 race for president as a Democratic candidate.

In a New York Times op-ed on Thursday, Schultz had an answer for them: Thanks, but no thanks.

“Despite the encouragement of others, I have no intention of entering the presidential fray. I’m not done serving at Starbucks,” Schultz wrote. “Although we have built an iconic brand while providing even part-time employees with access to health care, free college education and stock options, there is more we can do as a public company to demonstrate responsible leadership.”

In declining to enter the race, Schultz called on existing presidential candidates to rise above petty politics: “We cannot afford more false promises, slogans, theatrics and fool’s gold. Our nation has been profoundly damaged by a lack of civility and courage in Washington, where leaders of both parties have abdicated their responsibility to forge reasonable compromises to expand the economy, rebuild our infrastructure, improve schools, transform entitlement programs and so much more.”

He encouraged contenders to put aside party politics, even suggesting that the primary winners select a member of the opposite party as their vice presidential candidates: “Our country deserves a candidate courageous enough to select a member of the other party as a running mate. Our country deserves a president humble enough to see leadership not as an entitlement but as a privilege,” he wrote,

The suggestion that Schultz might enter the race was not far-flung. The coffee chain CEO has a reputation for being outspoken on social and political issues. In 2012, Schultz urged baristas at Washington, D.C.-area shops to write to “come together” on customers’ cups as Congress negotiated over the fiscal cliff. Earlier this year, he encouraged his baristas to start conversations about race with customers following protests over the police killings of unarmed black men in St. Louis and New York City. The “Race Together” effort sparked criticism of Starbucks, and the company ultimately ended parts of the campaign.

Schultz’s declaration that he won’t enter the 2016 race on Thursday reflect comments made recently in an interview. He was adamant that he wouldn’t run. “I don’t think that is a solution. I don’t think it ends well,” he said in the story. In his Thursday op-ed, Schultz failed to endorse a candidate. He went a bit further in his conversation with Time in February, giving a cautious endorsement of Clinton, saying he was content to “see what Hillary does.” 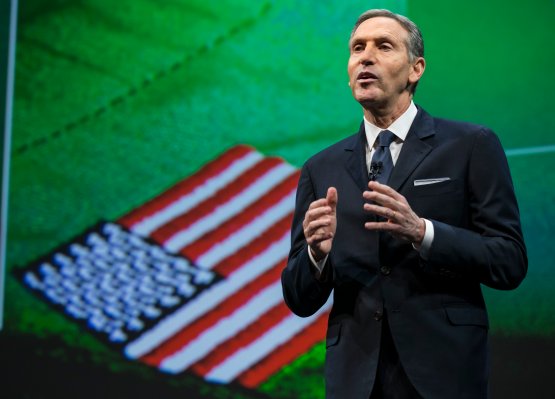 Friends Of Starbucks’ CEO Want Him to Run Against Hillary
Next Up: Editor's Pick