Coal plants like this one in Wyoming may eventually be closed under new climate regulations.
Jim Urquhart—Reuters
By Bryan Walsh

A “superwicked problem.” That’s the way many scientists have come to characterize climate change–and it’s not because they have a fondness for New England slang. A wicked problem is one that is so complex, with so many different causes and stakeholders, that it is all but impossible to solve completely. Poverty is a wicked problem; so is terrorism. But those pale in comparison with what’s happening to our planet.

Climate change is caused by virtually every energy-consuming act in the modern world, touches every person on the planet, has the potential to irrevocably alter the environment on which every living thing on earth depends and extends from the present into the distant future. And nearly half the country denies it’s a problem at all. Hence the super.

But for such a superwicked problem, the years-in-the-making Clean Power Plan that President Obama unveiled on Aug. 3 can seem a deceptively simple solution. The Environmental Protection Agency (EPA) will give each state a goal for cutting greenhouse-gas emissions from power plants. States have to come up with their own methods to hit those targets over the next several years–cutting the use of coal, expanding renewable or nuclear power, improving energy efficiency. Another rule will require that future power plants produce about half the rate of pollution that current plants do–all but ensuring that no new coal plants will get built.

The White House predicts nothing less than an environmental sea change. The EPA projects that by 2030, power-plant emissions will be 32% lower than they were in 2005, as a result of what Obama not inaccurately called “the single most important step America has ever taken in the fight against global climate change.”

Of course, that’s only if it happens. The reality of Obama’s plan is significantly more wicked–there’s a reason the full text runs 1,560 pages. Obama is trying to achieve by regulation what he was unable to do by legislation, after a comprehensive climate bill failed in Congress during his first term. The final result is inevitably messy, a complex compromise that tries to give the power industry time to clean up while still being tough enough to help the U.S. cut its total carbon dioxide emissions 17% below 2005 levels by 2020–a promise it made as part of global climate talks and one it needs to keep ahead of a major U.N. summit at the end of the year.

Meeting that goal would be tough enough without political opposition, but the Clean Power Plan will face major legal challenges from industry and from states with coal-dependent economies like Kentucky and West Virginia. While the EPA has the power to impose carbon-cutting plans on states that refuse to enact their own, that too could lead to a long and tangled legal fight. And if a Republican President is elected in 2016, he or she would be in a position to simply stop enforcing Obama’s climate regulations–and judging from the outraged reactions of the current slate of GOP candidates to the EPA rules, that’s not a far-fetched possibility.

Not wicked enough? Even if the Clean Power Plan works and the U.S. meets its carbon-cutting goals, that still won’t solve the much larger problem. America accounts for only about 17% of global emissions, so any effective solution to global warming will require concerted action from other big countries–most important, China, now the world’s biggest polluter. And while Washington and Beijing last year reached a historic agreement to tackle climate change, China won’t actually be reducing carbon emissions anytime soon. Other big countries like India are even less eager to commit to cuts, citing an understandable need to keep growing their economies.

For all the effort and the anguish, the world could be doing much more. The International Energy Agency has estimated that even if every nation fulfills its current pledges on climate change–including Obama’s plan–the world will still fail to prevent what scientists believe will be dangerous warming. The Clean Power Plan is a start, even a historic one. But when it comes to a superwicked problem like climate change, as Obama himself said, “there is such a thing as being too late.”

–With reporting by JUSTIN WORLAND/NEW YORK 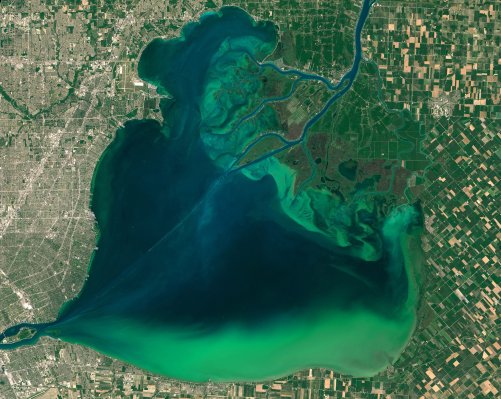 See Striking New Images of Algae Blooms in the Great Lakes
Next Up: Editor's Pick