Meet the Republican Candidate Who Won't Be at the Debates

When Fox News hosts the first Republican presidential debate Thursday, there will be 10 candidates on the main stage. Another seven will debate in a separate forum earlier that evening.

But there will still be one candidate left out.

Former IRS Commissioner Mark Everson, who is running a longshot campaign in the crowded GOP primary, won’t be in either debate, and he’s so unhappy about it that he’s filed a formal complaint with the Federal Election Commission.

“There are 18 recognized candidates on the GOP website, and I’m the only one of the 18 who’s not going to be at the debate,” Everson told TIME.

Fox handed out debate invites to the main event by looking at which 10 candidates did the best in the five most recent national polls. Invites to the second-tier debate were originally going to go to candidates with at least one percent support in the polls but were then opened to those who were regularly included on polls.

Everson has not been included on most presidential polls, but he was on a list of 19 candidates that Suffolk University asked likely New Hampshire Republican primary voters about. In that poll, voters were asked to give a thumb’s up or down on whether each candidate should be allowed in the debate. Everson came in 18th place with 30 percent saying yes, just ahead of former Virginia Gov. Jim Gilmore, who will be in the second-tier Fox debate.

Everson contends that Fox had failed to meet the legal requirement of selecting candidates based on ‘pre-established’ and ‘objective’ criteria. He says, “Because of cost, most polling outfits only put in well-known names refusing to add in many of the candidates until just recently. Like them, we are trying to fight our way into the polls as well.”

“I am the only commoner in the field,” he adds, “if you look at the rest, they are either career politicians or very wealthy people.”

Fox has not been responding to either his calls or his letters.In his complaint, Everson has asked the FEC to compel Fox into allowing his participation in Thursday’s second-tier debate.

But even if he does not make it, Everson will continue campaigning, and try to make it to the later debates. “When you do real work on the ground, the media and the people notice,” he said. 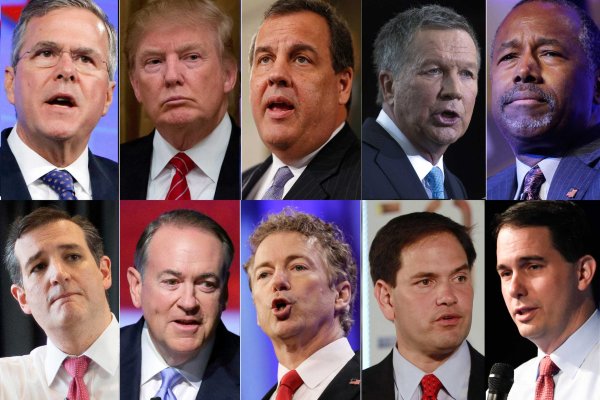 Here's What Each Candidate Needs to Do at the First Republican Debate
Next Up: Editor's Pick