A top ally of Kentucky Sen. Rand Paul was indicted Wednesday in connection with an alleged plot to pay off an Iowa state senator in exchange for endorsing the 2012 presidential campaign of Paul’s father.

Jesse Benton, who runs the super PAC supporting Rand Paul’s presidential campaign, was charged with conspiracy, making false statements to the FBI and the Federal Election Commission and other offenses stemming from the alleged endorsement-for-pay scheme. Two other senior aides on Ron Paul’s 2012 presidential campaign, John Tate and Dmitri Kesari, were also indicted.

According to the U.S. Department of Justice, the three senior advisers to Ron Paul negotiated a deal during the fall of 2011 to pay Kent Sorenson, then an Iowa state senator, to renounce his support for Republican presidential candidate Michele Bachmann and endorse the elder Paul instead. Sorenson made the eye-popping switch at a public event on Dec. 28, 2011, just days before the Iowa caucuses, where Ron Paul placed third.

The indictment alleges the defendants ultimately paid Sorenson more than $70,000, using monthly installments of approximately $8,000 each. According to the charges, the trio concealed the payments “by causing them to be recorded – both in campaign accounting records and in FEC filings – as campaign-related audio-visual expenditures.” The cash was funneled through two companies before filtering down to Sorenson and his spouse, according to DOJ documents.

Benton denied the allegations last year. “I am not splitting hairs,” he told the FBI in July 2014, according to the indictment. “Sorenson was not getting paid off.” Sorenson pleaded guilty last year to concealing payments made for switching his endorsement and obstructing the subsequent criminal investigation.

Benton, who is married to Ron Paul’s granddaughter, has long been a close ally of Rand Paul’s. He served as a spokesman and later campaign manager of Paul’s 2010 Senate bid. In 2014, Senate GOP Leader Mitch McConnell hired Benton as campaign manager in a bid to shore up support with the party’s grassroots during a primary challenge, but Benton left the post before the election amid the ongoing investigation into the Sorensen scandal. “The press accounts and rumors are particularly hurtful because they are false,” Benton said then.

The indictment adds to the sense of turmoil swirling around Rand Paul’s presidential campaign as he prepares to compete in the first Republican debate on Thursday in Cleveland. The Kentuckian has seen his poll numbers slip as he struggles with fundraising. Paul is also running for re-election to the Senate.

“Senator Rand Paul is disappointed that the Obama Justice Department chose to release this just prior to the highly anticipated first Republican presidential debate; it certainly appears suspiciously timed and possibly politically motivated,” said a Paul campaign spokesman. “Additionally, these actions are from 2012 and have nothing to do with our campaign.”

In a statement Wednesday, Ron Paul also cast the charges as a political ploy. “I think the timing of this indictment is highly suspicious,” he said, “given the fact that the first primary debate is tomorrow.” An attorney for Benton made the same claim.

“That this indictment is now suddenly announced on the eve of the first Republican Presidential debate strongly supports our belief that this is a politically motivated prosecution designed to serve a political agenda, not to achieve justice,” Benton’s attorney Roscoe Howard said in a statement, according to the Washington Post. “Mr. Benton is eager to get before an impartial judge and jury who will quickly recognize this for what he believes it is: Character assassination for political gain.” 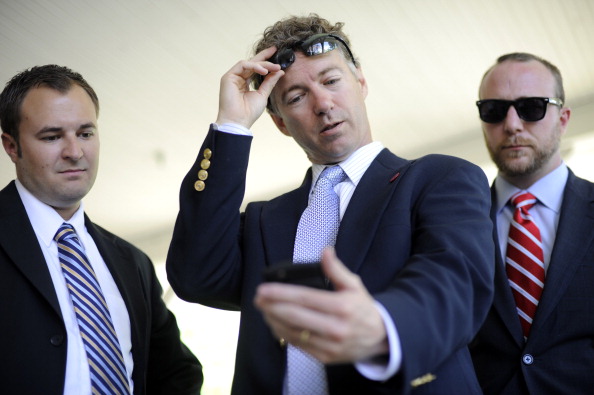 Rand Paul Launches Ads on Snapchat
Next Up: Editor's Pick