Why Netflix's Parental Leave Policy is Good For Babies

On Tuesday, video-streaming company Netflix announced it would be offering its employees a year of maternity and paternity leave during the first year after their child’s birth or adoption. It’s a progressive move that got us wondering: What effect will it have on babies?

Though the specific effects of parental presence on children is not fully understood, there’s plenty of research on the importance of early parent-infant bonds for successful development. “We have decades of research that tells us how important it is that a bond is established between parents and young children beginning at birth,” says Dr. Jack P. Shonkoff, director of the Center on the Developing Child at Harvard University. “The need for time to form secure attachments is critically important. It’s one of the most important things you can do to build a foundation for a lifetime of healthy development.”

The first year of life is also full of milestones for infants. According to the U.S. Centers for Disease Control and Prevention (CDC), during a baby’s first year of life they learn to focus their vision and are at the very earliest stages of language development. “The way parents cuddle, hold, and play with their baby will set the basis for how they will interact with them and others,” the CDC says.

“Babies need a sense of safety, predictability and responsiveness. We know from research that all areas of development—whether it’s cognitive development, emotional wellbeing, or social development—has its foundation in this secure relationship,” says Shonkoff. He adds: “We do a lousy job as a society supporting parents after the birth of their babies. It’s unconscionable with all the deep scientific understanding we have now. It makes no sense to not offer more of that flexibility and support.”

Then there is breastfeeding, which, if mother chooses to practice, is far easier to do if she is at home with her infant. Not surprisingly, a 2011 study found that women who took longer maternity leaves also breastfed for longer. The American Academy of Pediatrics recommends babies be exclusively breastfed for the first 6 months of life. After the first 6 months and until the infant is 1, the baby should continue to be breastfed while solid food is introduced as long as it is mutually desired by the mother and child, according to the AAP.

“Netflix is not a random sample of the U.S. population, but that said, my findings do suggest that having extra time at home can be beneficial for a child’s health,” says Maya Rossin-Slater, an assistant professor in the department of economics at University of California, Santa Barbara.

Still, according to Rossin-Slater, other data suggests that when employees go from already having a lot of paid leave to having more of it, the positive effect for kids is not as dramatic has going from zero paid leave to more. “Generally the consensus is when you extend leave from already pretty generous benchmarks to more generous bench mark there’s not much benefit for children,” she says. What this means for Netflix employees is yet to be seen.

And of course, the benefits to both parent and child will vary, to a certain extent, from family to family. “A parent who is home all the time and miserable isn’t good for the child either. What’s key, and what’s important about what Netflix is doing, is it’s giving parents the choice,” says Shonkoff. 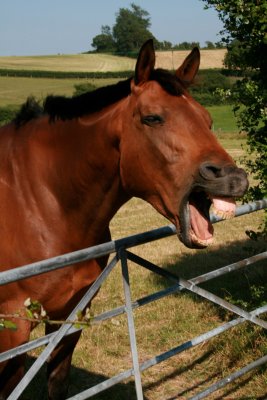 Horses Smile and Pout Just Like Humans, Study Says
Next Up: Editor's Pick