The Voting Rights Act at 50: How the Law Came to Be

When President Lyndon B. Johnson signed the Voting Rights Act of 1965 into law, exactly 50 years ago on Thursday, he noted that the day was “a triumph for freedom as huge as any victory that has ever been won on any battlefield.”

On Aug. 6, 1965, Johnson closed one chapter of America’s history of denying black Americans the right to vote. For nearly a century, the words of the 15th Amendment, which guarantees the right to vote regardless of “race, color, or previous conditional of servitude” had been rendered useless by subversive tactics like secret ballots, poll taxes, literacy tests and other discriminatory practices that essentially made it impossible for most blacks to cast a ballot. “It was like a stirring march that was written but never played,” TIME wrote of the 15th Amendment in 1965. Between 1890 and 1908, seven southern states had constitutional amendments that established poll taxes and grandfather clauses—which gave leeway to poor whites looking to vote, as long as their ancestors had voted before 1867—and stripped African Americans of their voting rights.

In 2013, Slate published what appeared to be an original copy of the type of literacy test that was administered in Louisiana during the long period before the passage of the Voting Rights Act. The test featured confusing prompts like “draw a line around the number or letter of this sentence” and “draw a line around the shortest word in this line.” According to research by the National Park Service, in Mississippi literacy tests asked questions like “how many bubbles are in a bar of soap?”

When these sneaky laws were in place, black voter registration and participation plummeted throughout the south. According to the Constitutional Rights Foundation, in Mississippi alone the percentage of black voting-age men who were registered to vote fell from 90% during the Reconstruction period after the 15th Amendment’s passage to about 6% in 1892. By 1940, only about 3% of eligible blacks in the south were registered to vote. And with the law on their side, segregationists in the South began to use more overt, and at times violent, tactics to keep blacks from voting.

Without the vote, African Americans had very little say in how their communities functioned. Their disenfranchisement sparked a movement across the country that demanded equal protection under the law and the right to vote. “Give us the ballot, and we will no longer have to worry the federal government about our basic rights,” Rev. Martin Luther King Jr. said during a speech in 1957, in the early days of the Civil Rights Movement.

In 1964, the Congress on Racial Equality and the Student Non-Violent Coordinating Committee led volunteers across Mississippi to register blacks to vote, during what was known as the Freedom Summer. The deaths of three volunteers—two white and one black—pushed Congress to pass the Civil Rights Act of 1964. The efforts in Alabama came to a head during the Selma marches in early 1965. Activists who had planned a march from Selma to Montgomery Alabama were met with Billy clubs and an angry mob led by state troopers as they crossed the Edmund Pettus Bridge on March 7, 1965, which would later be known as “Bloody Sunday.”

The startling image of the angry mob ravaging peaceful protesters reverberated across the nation, from the citizens who traveled to Alabama to stand in solidarity with protestors to President Johnson, who introduced the Voting Rights Act to Congress shortly after. “It is not just Negroes,” Johnson told Congress, “but it’s really all of us who must overcome the crippling legacy of bigotry and injustice.”

But, though Johnson’s actions may have seemed like a speedy turnaround after Selma, as TIME noted in 1965, the fight for the bill had been a long one already:

The hearings leading up to the vote on the bill made clear that the federal government’s prior efforts to block discriminatory laws and protect the right to vote had not been enough. (For example, when Congress granted federal access to voter registration records, Mississippi responded with a law that gave registrars the right to burn those very papers.) Under the new law, the federal government would have power to intervene directly if and when a state passed a law that would block certain citizens from voting. In essence, the bill picked up where the 15th Amendment left off. And weeks later, blacks wasted little time registering and getting out to vote, as TIME observed later that month:

Read more about the Voting Rights Act, from 1965, here in the TIME Vault: Trigger of Hope

Read more about what happened after the law was passed: The Voting Rights Act at 50: How It Changed the World 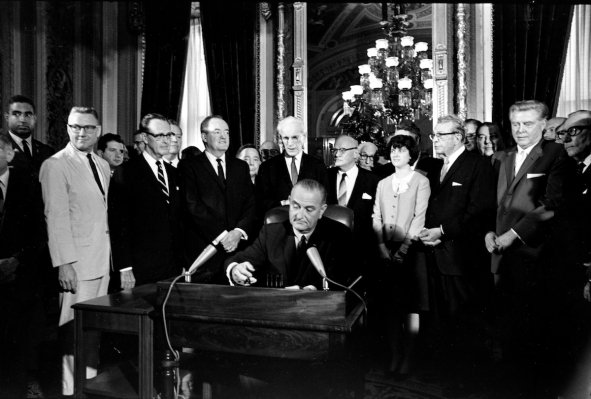 The Voting Rights Act at 50: How It Changed the World
Next Up: Editor's Pick