NASA’s Deep Space Climate Observatory (DSCOVR) has captured a view of the moon that is impossible to see from Earth—the “dark side,” illuminated as it passes between our planet and the Sun. The images were made by DSCOVR’s four megapixel Earth Polychromatic Imaging Camera (EPIC), from the satellite’s position a million miles away from the Earth on July 16.

Though this is not the first time the far side of the moon has been captured, it is the first illuminated view from this distance. The far side was first seen and recorded by the Soviet Luna 3 spacecraft in 1959. It has since been recorded and photographed in several NASA missions, including the Apollo 8 crew who were the first humans to see this side of the moon.

“It is surprising how much brighter Earth is than the moon,” Adam Szabo, DSCOVR project scientist at NASA’s Goddard Space Flight Center, said in a statement. “Our planet is a truly brilliant object in dark space compared to the lunar surface.”

DSCOVR was launched on Feb. 11 from Cape Canaveral, aboard a SpaceX Falcon 9 launch vehicle. Beginning next month, the satellite will provide daily color images to the public of the surface of the Earth just 12 to 36 hours from the time they are captured. 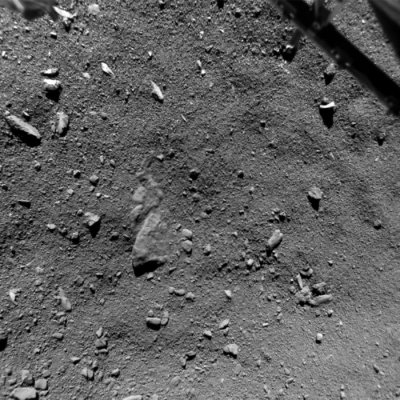 Precursors of Life Found on a Comet
Next Up: Editor's Pick