Your organization, Farm Sanctuary, is a farm in what sense?

It’s a farm in the sense that it has barns and pastures and fields. We grow hay for the animals, but it’s primarily a sanctuary, a place where animals get to live out their lives.

Kind of, but most farm animals who are raised and slaughtered in the U.S. are killed when they’re a few weeks or months old. You know, the only native farm animal in North America is the turkey. Turkeys have been so profoundly altered that they cannot even reproduce naturally anymore. And they grow so fast and so large that their hearts and their legs have a hard time supporting them. For some, it would be better if they were not born.

You’re a vegan. Isn’t it possible to eat eggs or wear wool without harming anything?

Whenever animals are seen as units for production, there are problems with the way we relate to them. If you have chickens who are your companions and are laying eggs, then I don’t see an ethical problem with eating the eggs. But if you’re getting chickens from a hatchery that’s breeding them to be mass-production hens, you have male chicks that are killed the day they’re born because they’re not economically viable.

Just because a hamburger is cheap at the fast-food restaurant doesn’t mean that there aren’t much greater costs associated with it, such as health and environmental destruction. And taxpayers subsidize this cheap factory-farmed food with the production of cheap corn and soybeans that are used as animal feed.

This year a new California law on the confinement of farm animals went into effect. How has agribusiness responded?

Proposition 2 prohibits the confinement of animals in cages and crates where they can’t turn around or stretch their limbs. Industry is still fighting that. My feeling is that they’re trying to buy time so that they can transition away from these industrial types of units into systems that treat animals a little bit better. But those alternatives are far from humane. The animals just have a little bit more space.

I think wild animals have better lives than animals in factory farms. So [hunting] is relatively less bad, but I would still not call it good.

You moved off the farm to D.C. Is lobbying the way forward?

It’s very difficult to get very much done in Washington or in most state capitals because agribusiness is so powerful. Most changes ultimately are going to happen in the marketplace as consumers start voting with their dollars in a way that does not cause animals to suffer.

How far does this go? Are you a supporter of the campaign for personhood for chimpanzees?

Farm Sanctuary is not involved with that, although we are sympathetic with it. Animals need to be recognized as living, feeling creatures.

Have animal-rights activists ever crossed the line to being public nuisances?

These issues are very emotional, and people become very passionate. But I think certain acts have probably not served our movement well. The core value of our movement is empathy for other animals, including human animals.

How much do you regret acting in a McDonald’s commercial as a kid?

I see it as a mistake. I wouldn’t do it again. But at that time I didn’t have a lot of awareness about what I was a part of. 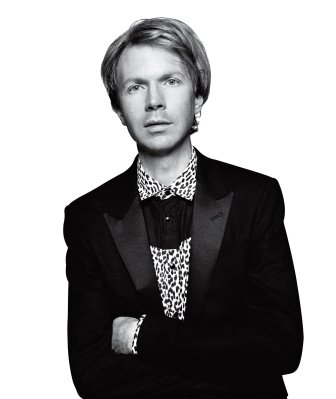 10 Questions With Beck
Next Up: Editor's Pick