Three things I know a lot about are the 1980s, montages and quickly setting up expectations with two short things and then creating humor through the surprise of subverting the expected pattern with the third. So my favorite part of the NCAA men’s basketball tournament is when it’s all over and CBS runs a collection of great moments set to the song “One Shining Moment,” which they’ve used since 1987. But even I realize that the song is dated. Things, after all, have changed a lot since 1987. Back then, we were cassette-listening, three-channel-watching virgins with tie-dyed sheets and a mullet that we knew we needed to cut off to get girls but had attached so much of our identity to that getting rid of it presented a personality void scarier than never having a girlfriend.

And while the song is inspiring and definitely on point, starting with a reference to the ball being tipped, it isn’t perfect. One of the four verses is “Feel the beat of your heart/ Feel the wind in your face/ It’s more than a contest/ It’s more than a race,” which is problematic since there’s no wind in arenas and basketball isn’t a race. Also, despite nearly three decades of network prime-time exposure and versions by Teddy Pendergrass, Jennifer Hudson and Luther Vandross, the song hasn’t gotten much radio play.

Inspired by this year’s scrappy underdog colleges that pulled off upsets–namely Harvard and Stanford–I decided that if I tried hard enough, I could improve the montage song despite having no musical ability whatsoever. One thing I do have, however, is email. Through which I learned that my college friend Pete Huyck was putting up Rhett Miller, the lead singer and songwriter of the amazing alternative country band the Old 97’s, while he was in town. It turned out Miller was the perfect person to rework “One Shining Moment,” having attended Sarah Lawrence College, which has a men’s basketball team. Also, his grandfather owned the first professional football team in Texas, the Dallas Texans, which failed so badly it moved to Baltimore to become the Colts, and he lost the family fortune. Anyone whose forefathers could lose money on football in Texas is the kind of guy with the business sense to do something for me for free.

In just two days, Miller wrote America’s new most inspiring sports song, “One Perfect Bracket.” This is despite the fact that while he claims to be familiar with many musical genres, he had never heard a single basketball song. Miller’s song moves the action from the court to the far more exciting interactive world of gambling pools.

All of the dudes and the

It could not be clearer they

It’s not just your breath or

It’s the way you seem

But one perfect bracket could

you’ve got to get this right.

Since the writer of “One Shining Moment” came up with the song after seeing a beautiful woman at a bar while watching Larry Bird on a TV, I asked Miller what he was thinking about when he wrote his lyrics. “In office culture, people are up against each other for raises or promotions. But all this pent-up competition can be transferred to this completely arbitrary thing like a college-basketball bracket,” he told me. After which I asked Miller if he’d ever worked in an office. “Hell, no,” he said.

Miller wasn’t hopeful that CBS would replace “One Shining Moment” with his song, since it is about gambling and a guy getting so stressed about his bracket that he dies of a heart attack. And when I got a CBS Sports executive on the phone, she wasn’t even interested in hearing it. “We have no reason to replace one of the most iconic songs in all of sports,” said Jennifer Sabatelle, senior vice president of communications. I mentioned that CBS had no interest in replacing Charlie Sheen either, but if you keep stuff from the 1980s around too long, it starts to get creepy.

So our song didn’t make it to the finals. Still, for one shining moment, I got a CBS vice president on the phone and bothered her. And even though I was in my own home and hadn’t actually showered yet when we talked, I felt the wind in my face. I also felt the wind in my face when ESPN told me they wouldn’t use it for after the finals of the women’s tournament. But still, my moment, via Miller’s song, will be on the web forever, because that’s how the Internet works. And maybe out there, a young person with no musical skills will hear it and be inspired to ask a famous musician to do something stupid for no reason and get free tickets to his supersecret show at a tiny bar. Also, I’ve got a call out to the NIT championship to see if they’ll use it. 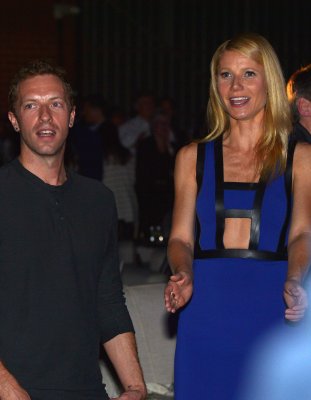 What Gwyneth Paltrow Really Means by 'Conscious Uncoupling'
Next Up: Editor's Pick