An Indian legislator in the country’s capital, New Delhi, triggered a controversy and is facing a strong backlash after saying his party would make the city safe enough for “beautiful women” to go out after dark.

Somnath Bharti, a member and former law minister of Delhi’s ruling Aam Aadmi Party (AAP), was trying to make a case for the party to have control over the city’s police force, the Indian Express newspaper reported.

“I am fully confident that if Delhi government is given full freedom [over security], beautiful women will be able to go out even after midnight without any fear,” Bharti said in the Delhi Assembly on Monday. (The city’s police force is under the control of the central government.)

Bharti was immediately condemned by opposition parties including Prime Minister Narendra Modi’s BJP and its main national rival, the Congress Party. The AAP also sought to dissociate from Bharti’s words, saying they represent his personal views, while women’s-rights groups condemned them as “sexist” and “bigoted.”

India’s capital has acquired a reputation for being one of the most unsafe cities for women in the country, following incidents like the horrific gang rape in 2012 of a 23-year-old medical student and, more recently, an alleged rape by a driver from ride-sharing service Uber in January this year.

The 41-year-old lawmaker’s own wife had some searing words for him. “He clearly isn’t concerned about my security but only the security of ‘beautiful’ women,” she said to Indian news agency ANI. “I’m an average-looking woman, maybe that’s why I was ill treated by him,” she added, repeating her previous allegations that he had abused her.

Bharti, who is also under investigation on molestation charges from the AAP’s 49-day stint in the Delhi government last year, justified his comments by saying that he merely wanted to emphasize the need for giving Delhi control of its own police force.

“I have said beautiful women laden with jewelry can travel at midnight fearlessly,” he explained. “[That] is the kind of benchmark one can measure security level at Delhi against, if AAP has police control.” 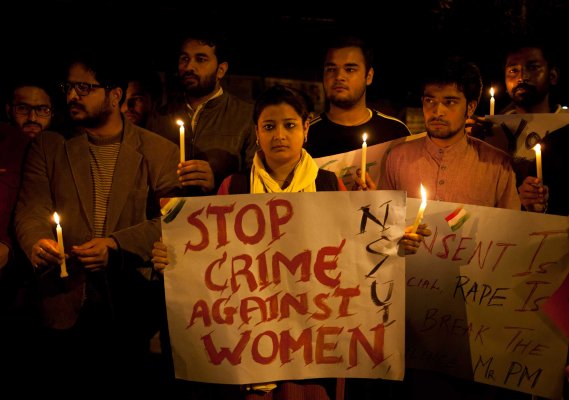