If All Goes Well, Afghanistan Gets Its First Peaceful, Democratic Transition of Power Ever

What promises to be an interesting campaign season kicked off in Afghanistan over the weekend ahead of national elections scheduled for April 5. Though there is no clear frontrunner in the historic race, a few of the colorful roster of 11 candidates running to become the nation’s next president look better positioned than others to take the lead, including former foreign ministers Abdullah Abdullah and Zalmai Rassoul, former finance minister Ashraf Ghani, and President Hamid Karzai’s own brother Qayyam Karzai. Karzai, who is constitutionally bound to step down from office come elections, has not officially backed any of the candidates. (Here’s a useful overview of the candidates from Tolo News and an overview of the coming elections from the Guardian.)

If these polls go off smoothly, it will mark Afghanistan’s first peaceful and democratic transition of power. Unfortunately, they’re not off to the smoothest of starts: the day before the campaign officially began, two campaigners for Abdullah were assassinated in the western city of Herat. And there’s plenty more to worry about: that inevitable vote fraud will be so rampant that the successful candidate will not have a credible mandate to govern, for instance, or whether, as NATO troops continue to pack up for their withdrawal later this year, Afghan security forces will be able to fend off insurgents bent on killing the democratic vibe.

But there is occasion to be optimistic as well. Afghanistan’s media landscape has changed drastically in the last decade, and for the first time many Afghan voters will be able to tune in to live debates between the candidates. That means the pressure is on for serious contenders to show voters that they have a plan for the country, and won’t be relying solely on ethnic block voting to garner a win. So far the candidates’ platforms look a little same-same, with issues like women’s rights, improving rule of law, maintaining security and job creation getting lip service across the board. But it’s still encouraging to see the country’s 12 million or so voters given a choice. 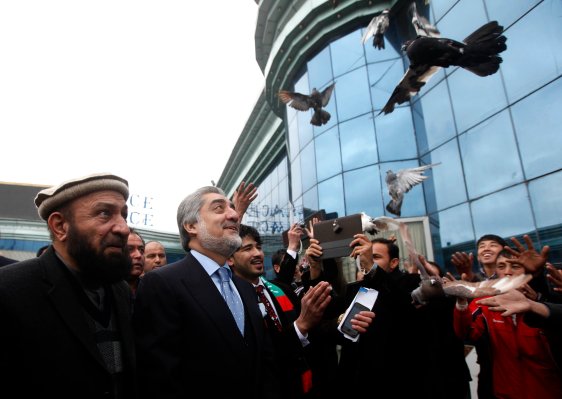 Afghanistan Presidential Election Season Kicks Off
Next Up: Editor's Pick