Drake dealt the latest blow in his ongoing feud with Meek Mill on Monday, opening his OVO Fest set in Toronto with a series of memes dissing the Philadelphia-born hip-hop star.

Rumors of Drake’s newest foray started swirling when he was caught wearing a shirt saying “Free Meek Mill” while rehearsing for his set.

The Canadian rapper first donned the shirt when Meek Mill was incarcerated after violating a probation order last year.

Before long, #FreeMeekMill was trending on Twitter, adding further fuel to the fire as fans weighed in over who is winning the weeks-long quarrel.

The diss tracks and jibes have been rolling off Drake’s tongue since Mill accused him of getting ghost writers to compose his raps. Most recently, when he was asked how he felt about potentially losing a rained-out kickball game, Drake responded that he hadn’t “taken a loss all week.”

Meek Mill has tried hitting back with his own diss track, but seems to be having a harder time of it. Some even suggest girlfriend Nicki Minaj dumped him because of the uproar. 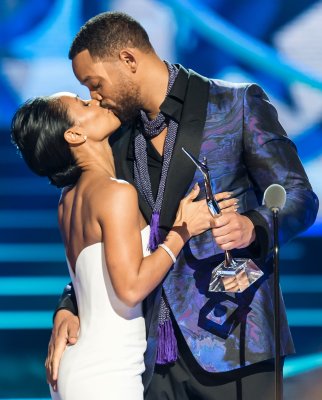 Will Smith: 'Jada and I Are Not Getting a Divorce'
Next Up: Editor's Pick