The murder of a 25-year old Hartford man over the weekend was the Connecticut city’s 20th murder this year, making this year already more deadly than last year as homicide rates spike across the country.

The incident in Hartford could indicate that a crime uptick sweeping larger cities is hitting smaller ones, too. Hartford saw only 19 homicides last year, but that was a low point in the city’s crime rate in recent years. According to police statistics, there were 33 murders in all of 2009, 27 murders in 2011, and 23 murders in 2013.

“Our police department continues to work with State and Federal partners in an effort to identify these criminals before they act, without concern for life, with the goal of preventing these most violent crimes,” Mayor Pedro Segarra said in a statement. “We are doing everything we can within our means to identify potential correlations that may assist our policing efforts. Even with a commitment of significant resources and partnerships across all levels of government, our community needs to continue to come together as government cannot address this issue alone.”

The nationwide uptick has prompted police chiefs from all over the country—including Chicago, New York, Los Angeles, and Philadelphia—to gather Monday in Washington to discuss tactics for stemming the bloodshed.

In larger cities, murders are noticeably on the rise. Baltimore is seeing an unprecedented spike in shootings, especially since the death of Freddie Gray in police custody in May.

Forty-five people were killed there in July, making it Baltimore’s deadliest month since 1972, even though the city has 275,000 fewer people than it did back then. Police say 191 people have been killed in Baltimore so far in 2015, and 116 of them were killed between May and July—the highest of any three-month period in records kept since 1970, the Baltimore Sun reports. And 2015 is also the first year that has seen two months with more than 40 killings.

Washington, D.C., is also seeing a spike in violent crime, with 84 homicides so far this year, putting 2015 on track to be the most deadly year since 2008. And in Chicago, murders and shootings have gone up, even as overall crime has gone down—there were 10 more murders in July than last year. Violent crime in Los Angeles is up more than 20%, even as the homicide rate in the city drops by almost 7%, according to the Los Angeles Times. 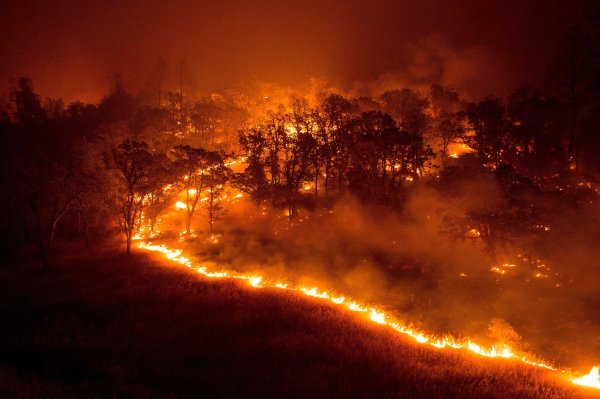 See the Devastation Wrought by Wildfire in California
Next Up: Editor's Pick