Mystery author Louise Penny has won the Agatha Award for best mystery novel of the year five times, but she balks at the Christie comparison. Instead of Hercule Poirot, Penny has brought readers Inspector Armand Gamache, the head of homicide at the Sûreté du Québec who is a mentor, a leader, a brilliant detective and a beloved husband and father. Through Gamache and a cast of other original characters, including an abrasive, drunk poet who has a pet duck, Penny has created eleven different mystery novels and one novella, many of them bestsellers, that weave together the excitement of classic whodunits with the pleasure of small town life. Her 11th book in the series, The Nature of the Beast, comes out August 25, and she’s already busy working on the 12th.

When you started writing your first Inspector Gamache book almost 15 years ago, did you ever think someday you’d be publishing your 11th?

No. Never. Never. Ever. I remember being in London at some event and my publisher or editor was talking about editing someone’s fourth book and the fact that she was having difficulty with her plotting or pacing, and I’m thinking, ‘How does someone get to the fourth? By then you must be an expert, how could there be any problems? You must know what you’re doing.’

What first sparked your idea for this series?

It was just after 9/11 that I started writing it. At the time, the world seemed a very frightening and threatening place and I felt the need for security and for connection and company and a sense of belonging, and of course the peace and security that comes with that. And so I created this village. To be honest with you, every decision I made in Still Life [Penny’s first novel, published in 2006] was selfish. I created it just for me. So I created Three Pines, and I created these characters that I would choose as friends, mostly because also I realized, having been a journalist for many years and spoken to many people in publishing, the chances of people published were so tiny. I realized that really writing it had to be reward enough because it may be the only reward I would get. So I created characters whose company I would enjoy, I created a main character who I would marry, I created a village I would love to live in. And as it turns out, other people feel the same as I do, thank God.

Your books take place in the fictional village of Three Pines, but the portrait of the place so intimately drawn. Did you take anything from your own small town in Quebec to create it?

It’s definitely drawn from a whole bunch of things. Absolutely from the Eastern Townships of Quebec. The books are many things, probably least among them crime novels. They are definitely crime fiction, but they are love letters to the place I choose to live. I could live anywhere in the world and I choose to live in the Eastern Townships of Quebec. People might read the books and think I’m creative, and the fact is I’m not. I just write what I see. And I write what I feel every day. And I have never been made to feel a stranger, [my husband] Michael and I have both been welcomed and embraced. It feels like there was always a place at the table just waiting for us. That home I had been yearning for for most of my life I found here, and the books are a big thank you to this area.

No one can read your series without wanting a warm ham and brie sandwich at the bistro – what role does food play in your books?

I love food. You only have to look at me to notice how much I love food. I realized that I wanted the location to be a character. And I wanted that very keen sense of place. And I thought the best way to do that was to make the books really sensuous, so that when you read the books it’s not just going into your brain, it’s going into your nose and your ears and you’re smelling the café au lait, and you’re tasting the ham and brie sandwich, you’re feeling the warmth of the fire after the cold outside. So I wanted to try to bring down that fourth wall so people would feel not that they’re voyeurs, but that they’re actually sitting in the bistro.

Your new book deals thematically with the idea of whether you can ever separate the creator from the created. What do you think?

One of your most memorable characters is a poet, and we see snippets of her work throughout the series. What function does poetry serve in your novels?

Poetry for me is a lot like music. I listen to music because it allows me to get to places emotionally in myself that I couldn’t normally access. Music makes me feel, and the same with poetry. Emerging writers, if they ask for any advice from me, and often even if they don’t, I give them advice to read poetry. I don’t care whether it’s Winnie the Pooh or a greeting card or Yeats and Auden or anyone else. I think poets manage to achieve in a couplet what I struggle in an entire book to achieve. My last book quotes Robert Frost and a letter he wrote to a friend where he describes his creative process as a poet. And he says that for him, a poem begins as a lump in the throat. For me, each book of mine begins as a lump in the throat. And in fact, it begins with a couplet. I find a bit of poetry, I write it out on a Post-it, and I stick it on my laptop. So when I inevitably get all lost and confused, I can go back to it and say, ‘That’s what the book’s about.’

You used to be a journalist for the Canadian Broadcasting Corporation – why did you decide to become a novelist instead?

I always wanted to be a novelist and the journalist was the side road, because I was too scared to try. I think I was a combination of I was too afraid to try to write, in case I realized I couldn’t and then I would lose the dream, and also I was very fortunate in my upbringing in that nothing bad ever happened to me. It was lucky from a personal point of view, not so lucky from a novelist point of view. I was fairly callow. There’s a line from Auden in his elegy to Yeats where he says Ireland hurt him into poetry. What a great line. I had to be hurt into novel writing. I had to get to a certain stage. I had to lose enough people, I had to have a lot of ego pounded out of me and pride, I had to learn compassion. I had to do enough vile things that I hated myself, and then was forgiven, so that I had something to write about that wasn’t about how other people perceived me.

I get up at 5 and feed the dog and walk the dog. My husband isn’t well so that’s why I get up at that hour, it gives me four or five hours just to myself with quiet in the house to write. And then by 10 or 10:30 I’m generally finished. I set a word count for myself. When I first start the beginning of a first draft, I set it very low because it’s so frightening to start a first draft. I set it at about 200 or 250 words, which I can do perhaps in 20 minutes and then have the rest of the day to myself. It’s so scary for me still. I wish I could say at book 11 or 12 that I was over the hump, but there are different humps. I’ve gotten over some, but then lo and behold, there’s another one right there. So I set the word count very low, and then I raise it to about 1,000 words minimum. And once I’ve finished the 1,000 words, for the rest of the day I can focus on my husband and on me.

What are some of your favorite mysteries?

Agatha Christie, of course. That was the starting point, she’s like a godmother to me, though [my books] aren’t really Christie-esque. I really loved the Maigret books by George Simenon. He had a real sense of place. And I loved Josephine Tey. [Her books] are gems, crystalline, every word, every phrase has a purpose.

Can you give me a hint about what’s next for Inspector Gamache?

Well, there is the alien invasion…

This interview has been lightly edited for length. 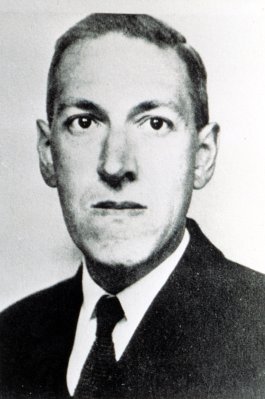 Read a TIME Article Written in the Style of H.P. Lovecraft
Next Up: Editor's Pick