Why Your Brain Thinks This Picture Shows a Giant, Martian Crab Monster

Is this a terrifying crab monster or just a pile of rocks?
NASA
By Jeffrey Kluger

Think you’re savvy in the ways of social media? OK, which of the following two headlines would be likelier to get your attention?

If you said a), you can probably forget about that job application you sent to Facebook. It’s the crab monster news that, of course, has set social media on fire in the past day, with a real-life, wholly gross image sent back by the Mars Curiosity rover that — when seen up close — does appear to show some sort of giant crab lurking in a cave.

But here’s the less clickable part of that news: It’s definitely not a giant crab lurking in a cave. In fact, it’s just one more example of the sometimes whimsical, always spooky phenomenon known as pareidolia, or the tendency of the brain to see familiar shapes—especially faces—emerging from random patterns.

Pareidolia is what’s behind J.C. Penney’s disastrously ill-designed Adolf Hitler teapot, which was not the marketing name the Penney folks assigned to it, but is the only way the unfortunate product will ever be known thanks to the mustache, bangs and upthrust arm it calls to mind. It’s also the reason we see faces in the random patterns of marble tiles or burned toast, or in the more orderly design of a handbag with two side-by-side loops where the handle is attached and a horizontal zipper below, forming a mouth and a pair of eyes.

The pareidolia phenomenon is actually a deeply rooted one, something that helps infants focus on faces early and also allowed humans in the wild to spot danger easily—picking a potentially menacing human or animal peering out from a backdrop of leaves or scrub. Yes, more often than not it’s a false alarm, but better to overreact fifty times than under-react even once.

A 2012 study published in the Proceedings of the Royal Society used functional magnetic resonance imaging (fMRI) to pinpoint the spot in the brain in which pareidolia plays out, and determined that it’s actually in two spots called the left and right fusiform gyrus. It is the left that reacts first to a possible face in a background pattern, sending out a What’s this? signal to the right. The right then makes the call—Is this really a face?—and for safety’s sake, it tends to err on the side of yes. The left then uses those few processing microseconds to consider the context of the image, and often as not will sound the all-clear. The right, however, is sometimes not persuaded, and continues to process the image as a face—helping us avoid danger, perhaps, but scaring us more than we need to be too.

This is not the first time something suspicious on Mars got Earthlings worked up. In 1976, the Viking 1 orbiter discovered what for all the world appeared to be a face staring up from the Martian terrain. Even in that pre-Internet era, the image went the 1970s equivalent of viral, and later figured significantly in the 2000 Brian de Palma movie, Mission to Mars. By then, however, the face had already been unmasked, with a subsequent flyover by the Mars Global Surveyor in 1998 showing it merely to be the natural landform it was—and one that had significantly eroded away at that. A subsequent image from 2001 showed even more natural erasure of the original shape.

In fairness to the folks freaked out by the current image, a crab is not a face and the brain has to work a little harder to force that image out of the background shapes, but it does the job all the same—just as it will interpret a branch in the underbrush as a snake or a shadow in the closet as a monster. Your pattern recognition regions are not the smartest part of your brain, but they’re not designed to be. They only have to be right once, and on the offchance you ever do run across a bear in the woods or a crab monster on Mars, you’ll have your fusiform gyri to thank for keeping you alive. 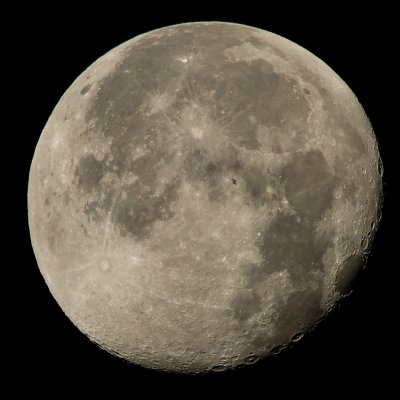 See the Space Station Caught in the Light of the Moon
Next Up: Editor's Pick