Rohingya men look out from behind a barbed-wire fence used as a barrier to restrict travel on Nov. 25, 2012, on the outskirts of Sittwe in Burma
Paula Bronstein—Getty Images
By Francis Wade / Sittwe

The policeman manning the barbed-wire roadblock at the entrance to Bhumi quarter in Sittwe spells out the rules: if the Rohingya try to leave without a permit, they are apprehended and taken back to their homes. Asked if the Rakhine are treated the same, he smiles, embarrassed, and shakes his head. This neighborhood, in the capital of western Burma’s Rakhine state, is one of several Muslim-majority areas of the town that have been transformed into de facto open-air prisons, with the movement of inhabitants tightly restricted by armed guards.

The ghettos are among several developments to have occurred in Sittwe since violence broke out between Rakhine Buddhist and Rohingya Muslim communities in June 2012. Their populations are gradually thinning out: reports of a massacre of Rohingya in early January by Rakhine mobs and soldiers in Maungdaw in the north of the state quickly spread south, triggering panic among some residents of Bhumi and poorly guarded refugee camps nearby and causing them to up sticks and move to camps nearer the coast.

Those who have remained in the quarter look out dejectedly from doorways or wander listlessly through the quiet, dusty streets: only a year and a half ago they would travel into the town center to trade, shop, visit the doctor or take their children to school — those routine activities are now off-limits. Confined to 2 sq km, life has been whittled down to its most basic form.

“Every day I would go to the market to sell eggs,” says 65-year-old Abdul Rahim, who, having not left the quarter since the barricades first appeared in June 2012, relies on the slim earnings his son makes at a nearby shop. “Now I’m all the day sitting and thinking, and feeling unhappy.”

If hospital treatment is required, inhabitants have to seek an exit permit from authorities; this is usually granted only in emergencies. U Khasin, 87 and suffering from high blood pressure and water retention in his legs, instead travels to a Muslim community clinic on the edge of the Thae Chaung refugee camp behind Bhumi quarter.

The policeman at the barricade shuffles nervously as he explains a policy he seems reluctant to enforce: were Rohingya to enter downtown Sittwe, he says, they would likely face attack from Rakhine.

Although the Rohingya have for generations lived in Burma — which is officially known as Myanmar — they are not included on the country’s official list of 135 ethnic groups on the specious grounds that they are land-grabbing interlopers from neighboring Bangladesh. They are denied citizenship and face severe restrictions on marriage, employment, health care, education and now daily movement. The U.N. has dubbed the community “virtually friendless.”

With no government-led efforts to rebuild intercommunal harmony, animosities have festered and hardened. Many Rakhine complain that the Rohingya’s desperation and poor education makes them a menace, and that their movements should be tightly controlled. Others say that it isn’t the Rohingya who have it tough but the Rakhine.

Khaing Kyaw Moe, a senior member of the Rakhine Nationalities Development Party, goes as far as to compare his people to the long-suffering Palestinians. He says the Rohingya are like the Israelis, “extending their buildings into Palestinian territory,” and warns that “if our government remains weak and the international community doesn’t begin to understand,” then Rakhine state will become as riddled with conflict as the West Bank. Comparing the fearful and isolated Rohingya to the mighty Israeli state is, of course, absurd — but then, prejudice almost always is.

The head of a school in Sittwe says the Rohingya should stay in camps until they are taught to be tolerant of other religions (the fear of many Rakhine is that the Rohingya are inclined toward Islamic extremism). He has cut contact with former Muslim friends, largely through fear that if the parents of his pupils discovered he still interacted with Muslims, they would pull their children out of school.

For the Rohingya, social exclusion and ghettoization are the final indignities. In the Thae Chaung camp, children walk around with no clothing beside open sewers, their bellies bloated in a telltale sign of malnourishment. Aid workers, journalists and diplomats have been visiting the camps for more than a year and a half but little has changed, save for their sagging tarpaulin shelters, which have become even more wretched and frayed.

New families have moved into shelters vacated not long ago by asylum seekers, who have taken to the sea on overloaded boats bound for Malaysia and beyond. Some of these new arrivals at the camp are not victims of direct violence, but rather of the fear that what happened in Maungdaw in early January could soon happen to them. They’ll soon be looking seaward to plan their own risky exits — and that suits the Rakhine just fine. 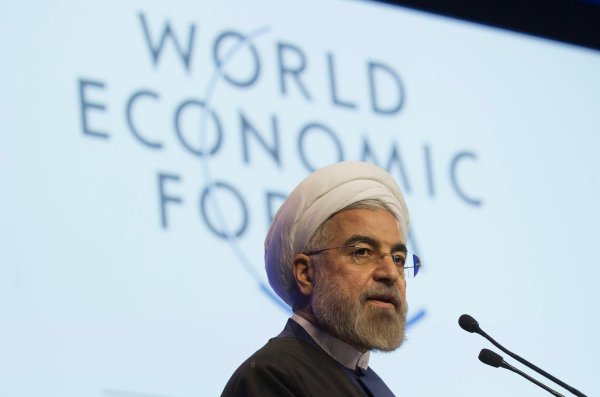 Iran Gets Its Most Senior Foreign Business Delegation Since 1979
Next Up: Editor's Pick