The Republican Party’s continuing struggle to deal with the political rise of Donald Trump to the top of presidential polls played out this weekend in front of 450 of the top conservative donors in the country.

With varying degrees of trepidation and admiration, Trump’s rivals for the 2016 Republican nomination faced questions about a palatable frustration within the electorate. Donors and reporters both asked: How can the party tap into that passion without necessarily putting Trump on the ballot? How does the party keep the Trump supporters involved if he flames out, as expected? And have Trump’s remarks on immigration undone the work these donors support through the political network supported by billionaires Charles and David Koch?

None of the answers are clear and it might take months for Trump’s impact on the race to be fully appreciated. His rivals, however, do not have that luxury of time. Trump is expected to be on the debate stage Thursday when the contenders meet for the campaign’s first date.

The answers from the candidates offer a hint at how the GOP coalition views Trump’s potency.

Texas Sen. Ted Cruz heaped praise on his rival for the GOP nomination. Wisconsin Gov. Scott Walker credited the real estate mogul and reality star with tapping into the frustration many conservatives have with Republican leaders in Washington. Sen. Marco Rubio lent his voice to those saying Trump’s frustrations are not imagined.

“There are people running for president—one particularly—that is tapping into people’s anger. I get the anger. But we need a constructive plan,” Bush said on Sunday. Left unsaid was the fact that Trump used Bush’s Mexican-American wife as a reason to vote against him.

Republicans have tried to address Trump and his improbably position atop the field in fits and starts. Trump roared into the race with an announcement speech that called immigrants in the country illegally rapists and criminals. He has shown no sign of softening his blunt broadsides against demographics, his rivals and Washington. That has led to plenty of handwringing, especially among establishment-minded conservatives who are aghast that the loud-mouthed businessman is deflating the prospects of more traditional candidates.

Criticizing Trump is seldom a painless affair. Trump often returns political fire with a disproportionate volley, and such exchanges only buoy his hopes among anti-establishment crowds.

As five rivals met with Charles and David Koch at a luxury hotel in Dana Point, California, Trump was on Twitter: “I wish good luck to all of the Republican candidates that traveled to California to beg for money etc. from the Koch Brothers. Puppets?”

Cruz was forgiving. “Quite a few members of this field have attacked Donald Trump,” Cruz said. “I have been glad to praise Donald Trump.” Cruz is hoping that some of Trump’s supporters now will turn into Cruz supporters down the road. It’s why Cruz has adopted some of Trump’s rabble-rousing. “If you think things are going great in Washington … I ain’t your guy,” he told Koch-backing donors.

Asked about Trump, who has criticized Walker’s tenure in Wisconsin as a disaster, tried to avoid any further engagement with the New Yorker. “It’s not just about Mr. Trump,” Walker said Saturday. Instead, he tried to cast Trump’s rise as a symptom of Americans’ frustration with Washington writ large.

Rubio, too, pointed to discontent among voters. “Clearly, he has hit on a theme people are frustrated by,” Rubio said Sunday when asked about Trump. “I don’t think you should underestimate how frustrated people are.”

For her part, Fiorina was circumspect. “It’s not just our ideas that matter … it is our tone,” she said Saturday. “We must have a nominee who is both a fighter and empathetic. Strong, and yet evidences humility. We can’t be judgmental, we can’t be vitriolic and we can’t be angry.”

The candidates were interviewed at the ritzy St. Regis resort in Orange County by Politico’s Mike Allen. The conversations were part of a three-day summit organized by Freedom Partners, a non-profit that effectively works as a fundraising clearinghouse for conservative-minded organizations backed by billionaires Charles and David Koch. The brothers mingled with donors, who each paid at least $100,000 to attend the private meetings.

For the first time, reporters were invited onto the property to attend selected sessions, including interviews with 2016 hopefuls. Other sessions touched on criminal justice reform, the Chilean economy and mobilizing conservatives.

But it was Trump who lingered over the events. “He’s clearly struck a chord,” said Marc Short, the president of the group that coordinates the Koch-backed groups’ activities and funding. One of the groups in that network is the LIBRE Initiative, which reaches out to Hispanic voters by helping some immigrants pass driving tests and in other places assists them navigate social services. Many of LIBRE’s projects help the very people Trump has demonized to fuel his rise: immigrants in the country illegally. 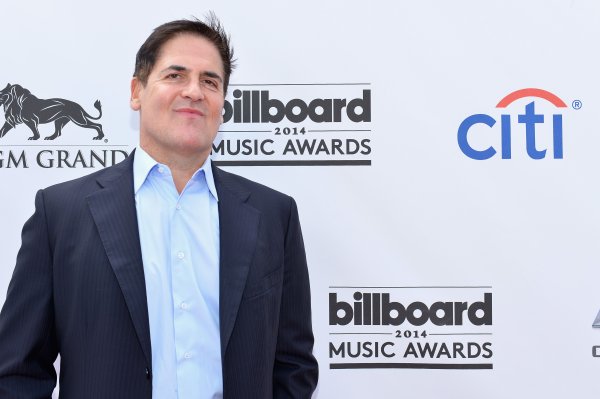 Here’s What Mark Cuban Has to Say About Being Donald Trump’s Vice President
Next Up: Editor's Pick