Victor Espinoza aboard Triple Crown champion Amiercan Pharoah heads down the stretch in the lead of the 2015 Haskell Invitational at Monmouth Park in New Jersey.
Staton Rabin—AP
By Nash Jenkins

American Pharoah finished first at the Haskell Invitational Stakes in New Jersey on Sunday, two months after becoming only the twelfth Triple Crown winner in a century.

American Pharoah finished the mile-and-an-eighth course in just under a minute and 48 seconds, pulling ahead of the horse Competitive Edge in the final stretch after maintaining a second-place stride for most of the race. The victory earned the horse’s team a purse of $1.75 million, bringing his career winnings to more than $5.5 million.

Nearly 61,000 spectators came to the Monmouth County race track to watch the celebrated colt race. Barring a moment when New Jersey Governor Chris Christie was booed in the winners’ circle, the crowd, Baffert said, was electric.

“I couldn’t believe the crowd, how loud it was,” he said to the Associated Press, his voice cracking with emotion. “It was a great crowd. I love bringing my horses here. Thank you for being behind Pharoah the whole way.”

It is reported that the colt, who turned three in Februrary, will retire from competitive racing in October — notably younger than most of his peers, who sometimes continue to race into their teens. 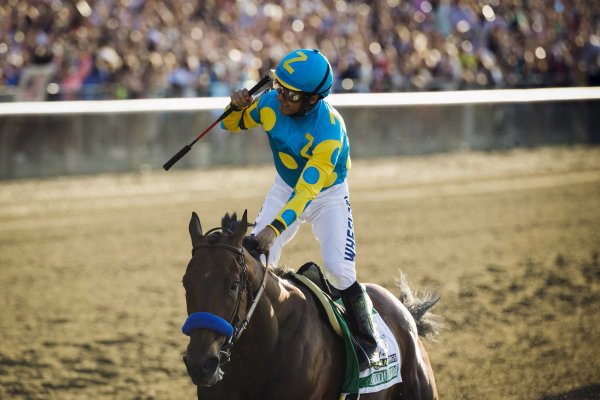 This Video Lets You Experience the Thrill of Riding a Champion Racehorse
Next Up: Editor's Pick