Australian surfing champ Mick Fanning knows how fortunate he is to have escaped a shark attack unscathed, which is why he donated just under $55,000 (or $75,000 in Australian currency) to a fellow surfer who wasn’t as lucky.

The sum is the entire television appearance fee Fanning earned from his recent interview with Australia’s Channel Nine show 60 Minutes, and he is giving it to Matthew Lee, the Guardian reports. Lee, 32, had to undergo surgery on both legs after being mauled by a great white shark in waters near the Australian town of Ballina last month.

Three-time world champion Fanning knows that risk better than most after narrowly escaping not one, but two shark attacks recently. The 34-year-old had to punch away a shark that attacked him during a televised competition in South Africa, and was then forced to scramble to safety after spotting another of the oceanic predators in his New South Wales hometown while shooting the 60 Minutes segment the following week — his first time back in the water after the first attack.

Lee’s family thanked Fanning and Channel Nine chief executive David Gyngell — who pledged a further $25,000 for the injured surfer’s treatment — in a statement posted on Facebook.

“Mick Fanning and David Gyngell,” the statement read. “No words can describe how grateful we are for the generous donation.” 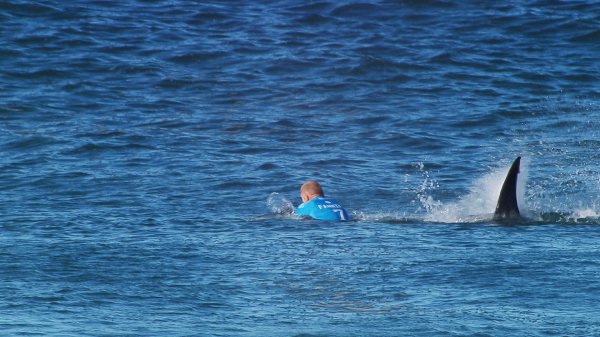 Aussie Surfer Has Second Shark Encounter in a Week
Next Up: Editor's Pick