When dawn breaks in Calais, France, Nabeel Edris’ hopes are momentarily dampened. Another night has passed, and the 29-year-old Eritrean has still not managed to reach England. As the sun rises, he begins his three-hour walk back to the dusty scrubland on the outskirts of Calais, to the makeshift camps known as “the Jungle” to its 3,000 residents. Edris has already ended up staying much longer than he imagined, but he refuses to call it home.

A brother, a son, a student, a citizen — Edris had once been many things to many people. But like everyone else in the Jungle, he now holds only the deracinated, dispossessed status of the migrant. “It is not a good life here, it is not good at all,” he says, picking at a yellowing wound on his shin, the souvenir of an attempt to scale the barbed-wire fencing that surrounds the port. Edris left his family behind in the Eritrean capital of Asmara nearly a year ago, fleeing the country’s compulsory lifelong military service. Eritrea’s repressive government scores lower on political and press-freedom rankings than even North Korea. Edris has crossed the sweltering expanse of the Sahara, made a perilous sea journey across the Mediterranean from Libya to Italy, and arrived in the French port city of Calais in the freezing depths of winter. But more than six months on, his quest is not over.

Edris shares the determination of countless migrants in Calais, who are desperate to escape the squalid conditions of the Jungle. Fueled by the belief that a better life awaits them on the other side of the Channel, they see their situation as temporary. They are drawn to England because they speak the language, have relatives and friends who have settled there or believe the job market will be better than in France.

Others feel differently. Many end up applying for asylum in France, giving themselves a time frame by which they will give up trying to reach England. Some continue to live in the Jungle while they endure the long wait for papers to be processed.

Sudanese men build a wooden structure at a make shift camp near the port of Calais in Calais, France, on July 31, 2015.
Rob Stothard—Getty Images

As a result, the Jungle is becoming a more permanent fixture in the Calais landscape. It sprung up without approval, but it has evolved into a shanty town of sorts — albeit one that falls far below international humanitarian standards. Though France is the world’s sixth biggest economy, the Jungle on the northern edge of Calais would not pass for a refugee camp in a developing nation. Guidelines from the U.N. High Commissioner for Refugees recommend a maximum of 20 people using one toilet, but in the Jungle, 300 migrants share a single toilet. Piles of garbage attract rats and flies, and the air is thick with the stench of sewage and rotting food.

However, locals who volunteer in the Jungle say conditions are slowly improving. In January the French government opened the Jules Ferry refugee center, built on a former children’s summer camp, with space for 120 women and children to sleep. In response to criticism from the U.N. and aid groups, the French government has begun a $550,000 project to improve the basic infrastructure in the camp. In the past month, streetlights have gone up and faucets providing cold water have been installed. Volunteers say that the camp is bigger than ever before, but also better organized.

“The government is more present on the ground here in Calais, and works more with the charities now,” said Carolyn Wiggins, 54, a longtime volunteer with the city’s migrant associations over the 11 years she has lived in Calais. In the past 18 months, she and her husband, Michel, have joined about 20 volunteers as part of the French aid organization SALAM. Five days a week, the couple help to serve 2,000 evening meals at the Jules Ferry center, where they have noticed a significant uptick in the number of people requiring food. They also collect supplies from the local foodbank, including vegetables, fruit and bread, and distribute them at the encampments twice a week.

The medical charity Médecins du Monde has also opened a makeshift hospital in wooden sheds where staff volunteers offer upwards of 40 consultations a day. Its director of operations, Jean-François Corty, told TIME that as well as infections caused by the filthy state of the camp, the staff are seeing more and more broken bones as migrants make even riskier attempts to stow away on Britain-bound vehicles.

A tent at a make shift camp near the port of Calais in Calais, France, on July 31, 2015.
Rob Stothard—Getty Images

Of course, not all the wounds are visible. In every tent is a story of personal horror, and the psychological effects of the journeys endured by the refugees are all too evident. Mustafa, 27, was training to be a doctor in Khartoum, Sudan, before he fled his country’s political turmoil. He is still traumatized by the image of a 15-year-old Syrian girl who died of diabetic shock during their difficult eight-day voyage across the sea from Egypt to Italy. “The boat owner told her father that it was a five-star boat with a doctor, and so he paid $50,000 for the family to cross,” he said softly, adding that the smuggler made the family throw the girl’s body off the boat when she died. “I still see her, I see her in front of my eyes.”

The women of the Jungle are haunted too, by their vulnerability in a camp where 90% of residents are men. Corty of Médecins du Monde said there has been a sharp increase in women and children in the camp since last summer, but the Jules Ferry center has been full for a long time. Those not lucky enough to get a bed there must sleep in the Jungle. “I am always scared, always scared to sleep,” said a 22-year-old Eritrean woman who gave her name only as Fiyori.

Yet for the most part, people in the Jungle prefer to exchange jokes rather than stories of woe. Many of the migrants wearily accept that they will be in Calais longer than they would like: “Bored of Borders,” reads a sign outside one tent. In the Jungle, you can now get your hair cut, get your bike fixed and even pray in an improvised mosque or church. Some of the more enterprising residents walk to the supermarkets in the center of Calais, stocking up on baguettes, potato chips and canned goods to hawk for a profit back in the Jungle. There are over a dozen pop-up shops, selling everything from cell phone SIM cards and cigarettes to whiskey, Red Bull and Coca-Cola.

Men buy from a shop run by Afghans at a make shift camp near the port of Calais in Calais, France, on July 31, 2015.
Rob Stothard—Getty Images

There are reports of occasional alcohol-fueled scuffles when frustrations spill over but most people in the camp aren’t looking for more trouble. A Nigerian refugee recently set up a makeshift school where volunteers teach French and drawing and play games with the children. At night, people dance to Michael Jackson songs under a disco ball in a makeshift club.

In the Jungle, life goes on even as most of the residents vow to continue their attempts to reach England. Mahmoud, a 22-year-old Sudanese whose entire family was killed by Janjaweed militia, said he will keep trying to cross until he makes it — or dies trying. Friends and family have arrived in England successfully, escaping the squalor that he has endured for 15 months. He refuses to build a more permanent shelter, sleeping under a black plastic tarpaulin propped up by wooden sticks. Scrawled across the outside in white letters are the words: Ceci n’est pas une solution d’hébergement. This is not a housing solution. 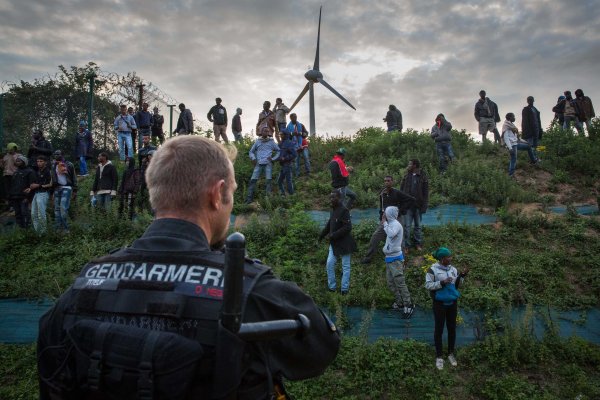 Inside Calais's Deadly Migrant Crisis
Next Up: Editor's Pick