Skydiving is tricky enough on its own, but trying to form a shape with 163 other people nearly 20,000 ft. in the sky is even tougher. The daunting nature of the task didn’t dissuade the group of skilled skydivers who jumped out of seven different airplanes at precise moments in an effort to set a new world record for a vertical skydiving formation.

The group succeeded, creating a formation that resembled a giant flower over central Illinois on Friday, while hurtling headfirst toward the ground at speeds of up to 240 m.p.h. It took the team, which was selected from training camps in the U.S., Spain and Australia, 13 attempts to get it right, but they ultimately broke the old record of 138 divers, set in 2012.

“It’s awesome, man,” said Rock Nelson, one of the organizers. “It just goes to show that if you can get the right group of people together and the right support team and good conditions, anything is possible … even on attempt number 13.”

The team was also accompanied by four skydiving videographers who chronicled the journey to the ground. 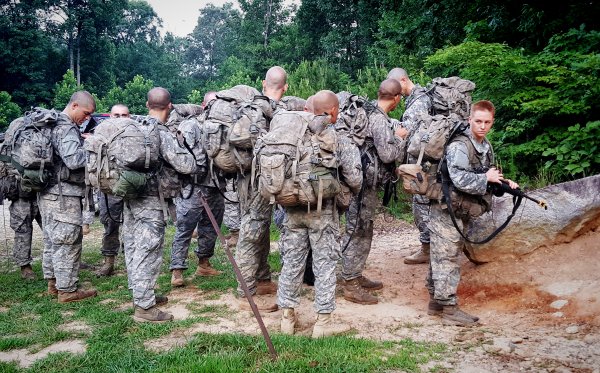 2 Women Have Made it to the Final Phase of Ranger School
Next Up: Editor's Pick