Here’s a pop quiz for you: what is one thing that Harry Potter, the young wizard of Hogwarts, and Pope Francis, the 78-year-old leader of the Catholic Church, have in common?

Harry Potter celebrates his birthday today, while Pope Francis celebrates the feast day of St. Ignatius of Loyola, the founder and patron of his 500-year-old religious order, the Society of Jesus (the Jesuits). While both Harry and Francis have taken the world by storm, it’s Francis’s relationship with his favorite saint that will have the biggest global effect on society and culture in the years to come.

So how does Francis’s Jesuit identity and devotion to St. Ignatius of Loyola affect his ministry as the universal leader of the Catholic Church? I would offer three ways.

Pope Francis seeks and finds God in all things.

This mission of finding God in all things is the trademark of Jesuit spirituality and at the heart of the pope’s worldview. The God of Jesus is intimately caught up in the details of human life. This God is especially close to his children when they are oppressed, when they are excluded, or when they suffer in any way.

Ignatius wanted his men to walk with people—particularly in the most difficult moments of their lives. One of Ignatius’s earliest companions Jerónimo Nadal said it well “We [Jesuits] are not monks! The world is our cloister! The world is our house!”

As a young Jesuit, Jorge Mario Bergoglio participated in a thirty-day silent retreat, where he prayed St. Ignatius’s Spiritual Exercises, which train people to carefully discern the quiet presence of God in all the gritty details of daily life in order to follow Jesus more closely.

In the Jesuit worldview, God is a friend and a teacher who guides us during life’s journey. This God is a colleague who wants to help us in the everyday decisions of life. So how does Francis build this type of a relationship with God? Through the act of discernment. Christian discernment asks us to takes a step back from life and sees where God is active in it. Saint Ignatius suggests that we can do this by asking three questions each day: where was God today? How did I respond? And where is God leading me tomorrow?

Francis does this (mostly) faithfully every night before bed. Through such discernment, Francis is better able to see the small things of life within the biggest horizons. In other words, for Francis, there are no small things.

The prophet Micah says that God requires three things of his people: to act justly, to love mercy, and to walk humbly. If that’s the case, Francis is passing the test. Mercy—in particular—is at the heart of the first-ever Jesuit pope’s pastoral ministry. “The Lord never tires of forgiving us!” Francis said during his first Sunday papal address to St. Peter’s Square. “It is we who grow tired of asking.”

Francis had a profound experience of God’s mercy on September 21, 1953. Here’s how he described it:

“I was almost 17. It was Students’ Day, for us the first day of spring, for you the first day of autumn. Before going to the celebration I passed through the parish I normally attended, I found a priest that I did not know and I felt the need to go to confession. For me this was an experience of encounter: I found that someone was waiting for me. Yet I do not know what happened, I can’t remember, I do not know why that particular priest was there whom I did not know, or why I felt this desire to confess, but the truth is that someone was waiting for me. He had been waiting for me for some time. After making my confession I felt something had changed. I was not the same. I had heard something like a voice, or a call. I was convinced that I should become a priest.”

Francis’s hero St. Ignatius too experienced the power of mercy. It was this grace that changed his life from a disaster full of sex, money, and ego problems to a life of service to God, the Church, and the excluded.

In Francis’s mind however, mercy isn’t just a gift received, but an action to be performed. He even created a new verb mercy-ing to express his desire for people to encounter each other and the world in a new way. We are called to be like God and Jesus, who Francis says, is pure mercy.

In the final analysis, it is the person of Jesus who can best explain Francis’s Jesuit identity. The Society of Jesus points and foremost the holy man of Nazareth who to the poor proclaimed the good news of salvation, to prisoners, freedom, and to those in sorrow, joy.

The Catholic Church teaches that the pope is—in fact—the Vicar of Jesus Christ. In other words, he acts in the name and person of Jesus. After 30 months with the Jesuit named Francis, it’s hard to disagree. 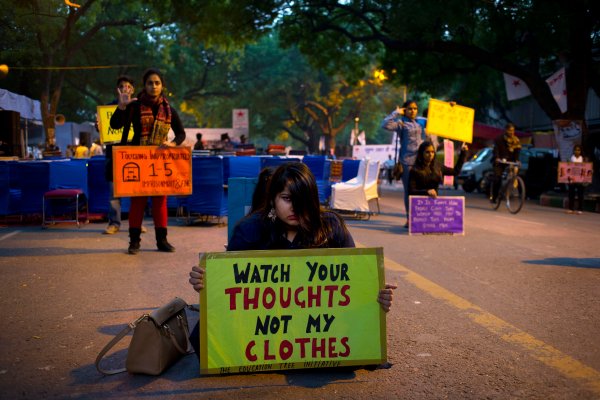 How Indian Women Are Reclaiming Their Right to Public Space in Delhi
Next Up: Editor's Pick