US Secretary of State Hillary Clinton can be seen wearing special glasses while testifying before the House Foreign Affairs Committee on January 23, 2013 in Washington, D.C.
MANDEL NGAN—AFP/Getty Images
By Zeke J Miller

According to Dr. Lisa Bardack, her physician, Clinton, is in good health, currently diagnosed with only hypothyroidism and seasonal pollen allergies. The letter is the first of its kind to be released in the 2016 cycle, and comes as Clinton, 67, has come under scrutiny from some Republicans for her age and questions about her health stemming from a 2012 incident in which she suffered from a blood clot and concussion.

Bardack’s letter provides the most detailed accounting of the 2012 episode, which came as Clinton was set to testify before Congress on the 2012 Benghazi attacks shortly before leaving office.

According to Bardack, Clinton fainted after becoming dehydrated from a stomach virus and suffered a concussion during the fall. During subsequent evaluations, Bardack said, Clinton was diagnosed with a “transverse sinus venous thrombosis,” a type of blood clot in the brain, and was given anticoagulants to dissolve the clot. After the concussion, Clinton experienced double-vision and wore glasses with a Fresnel Prism.

“Her concussion symptoms, including the double vision, resolved within two months and she discontinued the use of the prism,” Bardack wrote. “She had follow-up testing in 2013, which revealed complete resolution of the effects of the concussion as well as total dissolution of the thrombosis. Mrs. Clinton also tested negative for all clotting disorders.”

Clinton also suffered from deep vein thrombosis in 1998 and 2009, according to Bardack, as well as an elbow fracture in 2009, and takes Armour Thyoid and Coumadin daily.

“She does not smoke and drinks alcohol occasionally,” Bardack wrote. “She does not use illicit drugs or tobacco products. She eats a diet rich in lean protein, vegetables and fruits. She exercises regularly, including yoga, swimming, walking and weight training.”

Clinton’s last physical was March 21, 2015, and she is up to date on routine screenings, her doctor added.

“In summary, Mrs. Clinton is a healthy female with hypothyroidism and seasonal allergies, on longterm anticoagulation,” Bardack concludes. “She participates in a healthy lifestyle and has had a full medical evaluation, which reveals no evidence of additional medical issues or cardiovascular disease. Her cancer screening evaluations are all negative. She is in excellent physical condition and fit to serve as President of the United States.”

The full letter is below: 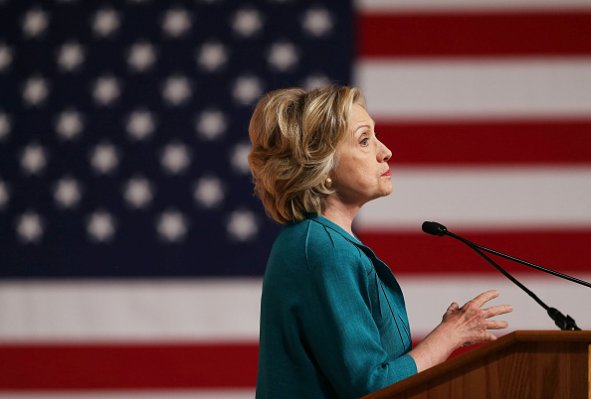 Hillary Clinton Calls for End to Cuba Embargo
Next Up: Editor's Pick