Why Syrian 'Safe Zones' Could Be Dangerous for Civilians and U.S. Policy

A refugee from the northern Syrian town of Tel Abyad and her children in Akcakale, in Sanliurfa province, Turkey, on June 18, 2015.
Umit Bektas—Reuters
By Rebecca Collard / Gazientep

It seems like a nice idea — a stretch of land just inside Syria along the Turkish border where civilians could return safely and moderate opposition rebels could defend the territory, while being trained and equipped to take on the Islamic State in Iraq and Greater Syria (ISIS).

In theory it could solve several pressing problems of the Syrian conflict, creating a refuge for rebels and civilians, pushing ISIS away from Turkey’s border and even giving the Syrian opposition the opportunity to govern territory.

Turkey has been pushing for a no-fly zone in northern Syria for two years. For Turkey that means an area protected from the warplanes and barrel bombs of President Bashar al-Assad’s air force. What the U.S. seems to have agreed to is a watered-down version of the Turkish dream, an area free of the Islamic State of Iraq and greater Syria (ISIS), not fighter jets. Three senior administration officials told Bloomberg on Tuesday that they saw the operation being limited to clearing ISIS forces from a 68-mile stretch of the Turkey-Syria border.

The zone being proposed would reach into Syria toward the province of Aleppo. In the eyes of Turkey, the zone would be established quickly and would provide area where rebels could train and where as many as 1 million Syrian civilians could return, protected by NATO jets and sympathetic Syrian rebels.

“This was launched as an ISIS-free zone because the two sides were unable to bridge their difference concerning the importance of regime change in Syria,” says Sinan Ülgen, a visiting scholar at the Carnegie Endowment for International Peace. “So there is ambiguity about the role of this zone.”

The contradicting ideas are an indication of the differences in the objectives of the U.S. and Turkey in Syria. For the U.S. the main goal is now to eliminate ISIS, but for Turkey the removal of President Assad and his regime is the priority.

The U.S. has previously resisted the idea of helping to establish any kind of zone inside Syria, but Ülgen says American involvement in such a project is likely a trade-off for Turkey finally allowing U.S. surveillance craft and warplanes to use two key airbases in southern Turkey near the Syrian border.

Some observers worry that in haste to secure these important airbases, the U.S. may have agreed to something with the Turkey without working out the details. “This is potentially a very big commitment, trying to carve-out a buffer zone,” says Kenneth M. Pollack, a specialist in Middle East political-military affairs and a former CIA analyst. “Trying to carve-out a safe haven in the middle of a civil war is incredibly difficult.”

One of the biggest challenges in taking and controlling any zone in Syria will be finding the ground troops to do it. So far both the U.S. and Turkey have said they won’t be sending their troops in to do that. That leaves the, slightly mythical, moderate Syrian rebels to do the job. The U.S. has said it will train and equip 5,400 such rebels to fight ISIS in Syria but Defence Secretary Ash Carter admitted earlier this month they had actually only managed to train 60 Syrian fighters. Just this week, at least one of the American-trained rebels, possibly a unit, was captured by Nusra Front, a large Al-Qaeda linked group fighting in Syria, calling in to question the effectiveness of the program.

Syrian rebel groups have long been asking for such a safe zone, or no-fly zone, says Louay al-Mokdad, a former spokesman for the Free Syrian Army. “How are they going to make it? This is the question,” says al-Mokdad.

The U.S. has had a difficult time finding rebels that meet its criteria. They need to be moderate, Western-friendly and focused on fighting ISIS, not President Assad and his government forces. “They went to Syria looking for unicorns,” says Pollack of the U.S. mission to find Syrian fighters that meet these standards.

Turkey has a different, much wider, idea of which forces are appropriate, as the government has an Islamist leaning, and the target for Turkey is still primarily Assad not just ISIS. But while it’s not clear who will control this area, it is unlikely Turkey would be happy with Kurdish forces playing that role. In recent months, Kurdish forces, particular the YPG, have been the boots on the ground for the coalition’s fight against ISIS, taking swathes of territory from the militants. But for the Turks, the Kurds are their traditional enemy, and they won’t support them or allow them to control more territory on their border. In this, the U.S. may be losing its best foot soldiers in the war against ISIS and this could hurt the mission, says Jonathan Friedman, a Middle Eastern affairs expert at the consultancy Stroz Friedberg and co-author of a recent Chatham House paper on the risks of the safe zone.

“There’s the risk that you’re substituting a group of fighters, the Kurds, who are very much focused on ISIS, are unified and won’t pose any threat to America, for supporting a group of Islamists whose intentions are unclear. Every indication is they’re not positively disposed toward the west,” says Friedman.

The bigger concern is that this could be a way of getting the U.S. more involved in Syria than it intended through what Friedman calls “mission creep.” Once the U.S. has made a commitment to this zone it could be pulled into the fight against Assad in Syria. While so far regime aircraft have avoided U.S. warplanes in the skies of Syria, if Assad’s air force were to approach this zone, it would put the U.S. in difficult position.

“Turkey has been trying to make Syria America’s problem from day one,” says Pollack, adding that they may have succeeded in bringing the U.S. closer to their position.

Many Syrians would welcome returning to their country as life as refugee is difficult. But with all this uncertainty about who will secure this zone and how, rights observers say the idea of returning refugees to this area from Turkey is dangerous. “There is no indication these so-called safe zones will actually be safe for civilians,” says Joe Stork, Deputy Director Human Rights Watch’s Middle East division, “and we are concerned by the suggestion that they might be considered appropriate places for Syrian refugees.” 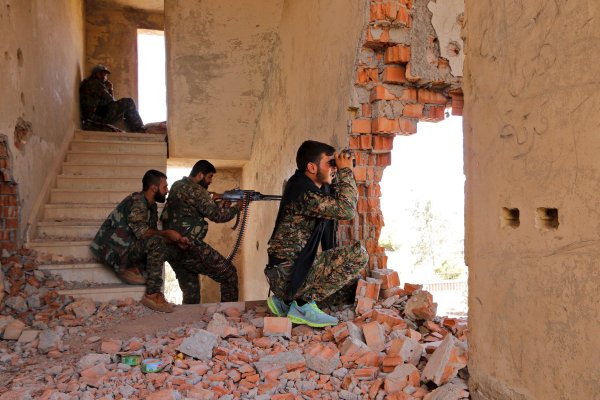 Why Turkey Sees the Kurds as a Bigger Threat than ISIS
Next Up: Editor's Pick