A woman looks at a new section of the Suez Canal during a media tour in Ismailia, Egypt, on July 29, 2015.
Nariman El-Mofty—AP
By Jared Malsin / Cairo

Egypt has completed construction of a multibillion-dollar expansion of the Suez Canal that the government says will boost the country’s economy and aid world trade.

The expansion was a massive project completed in just one year after it was initially projected to take three. It adds 35 kilometers of new channels, in addition to 37 kilometers of existing waterways that were dredged to allow larger ships to pass. According to the Suez Canal Authority, 258 million cubic meters of earth were removed from the desert to cut the new channels.

The development will allow more ships to pass through the canal on a given day, reducing wait times for one of the world’s most important shipping channels. The government expects that the project, along with increases in world trade, will increase the daily number of ships from 49 at present to 97 a day by 2023. The project’s total cost is more than $8 billion, but the government claims it will more than double the annual revenue generated by the canal, which is currently around $3 billion.

The canal was completed in 1869 and it allowed ships to get from Europe to South Asia without sailing around Africa. Control of it was considered so important that Britain, France and Israel tried to wrest it away from Egypt in 1956

For Egypt’s military-backed government, the completion of the project at lighting speed offers a chance to project an image of competence, prosperity, and stability after years of unrest following the 2011 uprising that unseated president Hosni Mubarak. The new portions of the canal are set to be inaugurated next week in an elaborate ceremony in which the government is expected tout the new canal as glorious achievement.

The task of portraying Egypt as stable takes on a particular urgency since the Egyptian state is fighting an ongoing battle against insurgents based in the Sinai Peninsula. An upsurge in attacks began in July 2013 after Egypt’s armed forces deposed Islamist president Mohamed Morsi who had been elected a year earlier. Since June, militants have assassinated Egypt’s chief prosecutor, attacked military positions, and launched a missile at a naval vessel in the Mediterranean.

“If they’re able to carry it out without any compromising security incidents, they’re also going to use this as an opportunity to project a different image of Egypt, an image of Egypt as stable, able to carry out major public works, and defend competently against these jihadi enemies,” said Michael Hanna, a senior fellow at The Century Foundation in New York.

The government’s message was clear on the banks of the canal on Wednesday, where officials had installed a billboard saying, “Welcome to safe Egypt and its secure canal.” At a news conference in the city of Ismailia, Suez Canal Authority chairman Vice Admiral Mohab Mamish repeteadly used the word “safe.”

“The whole world uses the Suez Canal. The world and the shipping lines are partners. We are sending them messages. We want to again assure everybody that the Suez Canal is very safe and secure, he said.

“The government is dealing with the whole thing in a very propagandistic manner,” says Amr Adly, a nonresident scholar at the Carnegie Middle East Center in Beirut. “The way the project was launched was to indicate that the new military-backed regime can do something, and they have proved their capacity to do something.”

Adly said that due to a lack of transparency it was difficult to assess the potential economic impact of the expanded canal. “There is definitely a political element in it,” he says. “It has a potential of course. There is a good chance that it will increase the revenue. But the way it is being dealt with, we don’t have enough information.” 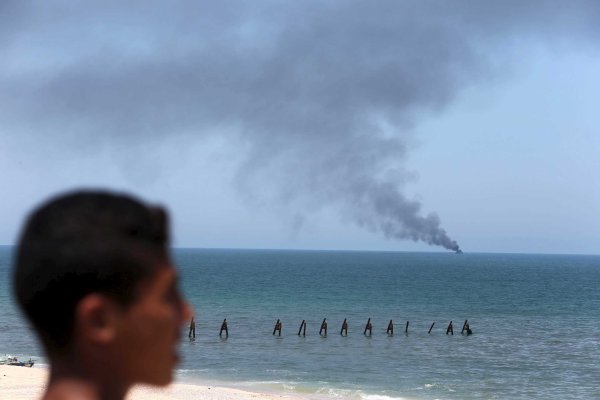 Egypt Is Struggling to Cope With Its ISIS Insurgency
Next Up: Editor's Pick