An controversial oil ship managed to sail past a group of Greenpeace protesters hanging from a bridge in Portland after police and Coast Guard officers forced the activists from the area.

The protesters had gathered to block a Royal Dutch Shell icebreaking vessel from leaving the area to head to a oil drilling site in the Arctic. Environmental activists had suspended themselves from the St. Johns bridge and formed a line of kayaks along the Willamette River in an effort to block the ship from leaving the city, but the ship, named Fennica, managed to slip through a gap in the dangling protesters just before 6:00 p.m. Pacific time.

For about six hours, according to local outlets, there was relative quiet. But Thursday afternoon, the Coast Guard and local officials began insisting that the protesters move.

According to OregonLive, which hosted a liveblog of the protest, officials at one point attempted to grab kayakers—called “kayaktivists” by organizers”—using boat hooks. Some of the activists who had situated themselves in slings underneath the bridge left voluntarily, but others were still dangling from it at about 6 p.m. local time.

Earlier on Thursday, activists were involved in a standoff with the vessel and the Coast Guard during which they temporarily blocked the ship from leaving dock. According to Oregon Public Broadcasting, protesters cheered and declared victor when the vessel turned around. A judge on Thursday fined Greenpeace USA $2,500 for every hour that protesters blocked the vessel from passing through. 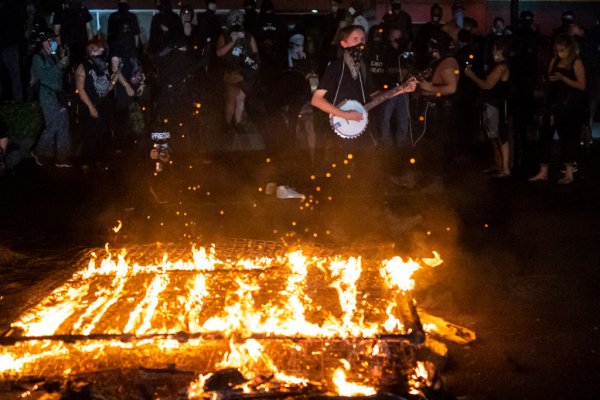