The Renewable Energy Source That's About to Boom Again

Turbines spin inside hydroelectric generators at the Hoover Dam in Boulder City, Nevada on March 24, 2014.
Bloomberg—Getty Images
By Justin Worland

Ten years ago hydropower might have been taken for dead in the United States. Environmentalists didn’t want hydropower dams because of the destruction they wreaked on nearby ecosystems. Energy companies had lost interest because hydropower wouldn’t produce enough energy to make the investment worthwhile. Indeed, in every decade since the 1970s, the U.S. has added less hydropower capacity than the decade prior.

But now energy experts say that new ways of thinking about hydropower has placed the energy source on the verge of a resurgence in the U.S. Hydropower production is anticipated to grow by more than 5% in 2016 alone, according to the U.S. Energy Information Administration.

“There has been more interest in the last few years. There are a lot of projects being considered,” said Rocío Uria-Martinez, an energy researcher at Oak Ridge National Laboratory. “Hydropower is, or it can be, a very viable complement for the other renewables.” The U.S. has some 80,000 dams, and only 2,000 are being used to harness electricity, according to Uria-Martinez. Adaptations to existing dams could drive a 15 to 20% increase in total hydropower capacity in the U.S. At the same time, adapting dams saves the cost of building new ones from the ground up.

While experts anticipate dramatic growth in hydropower in the coming years, don’t expect to see another Hoover Dam anytime soon. “Building large dams is almost out of the question in the U.S. and in Europe because of environmental constraints,” said Uria-Martinez. Energy policymakers have focused instead on developing sustainable hydropower dams, which are typically on a small scale. In some communities this means installing hydropower capabilities to existing dams that have never produced electricity.

In some areas, increasing dam efficiency has meant eliminating dams that harm the environment and replacing them with more sustainable ones. The Penobscot River in Maine, for instance, had several dams over hundreds of miles of river, many of which were operated inefficiently. Seven conservation groups teamed up and employed scientists to consider how to increase energy production and, at the same time, eliminate some dams. In the end, the group ended up dismantling two dams while achieving the same energy output with the remaining ones.

“We got the river to produce exactly the same amount of hydropower as before but with 1,000 km of connected river,” said Giulio Boccaletti, who runs the water program at the Nature Conservancy. He argues that similar results can be reached in other places around the world.

“Whether we like it or not, over the next 20 years, roughly, the world will double its hydropower capacity,” he said. “How do you intervene in a world where saying no to that development is simply not an option? I think there’s appetite for a more sustainable outcome.”

In the early stages of electricity production in the U.S., hydropower played an important role. Communities first used free-flowing water to harness electricity in the late 19th century. In need of electricity, communities across the country built dams to harness the power of free-flowing water during the first half of the 20th century. In the 1960s, heightened environmental consciousness piqued American interest in conservation, and hydropower quickly fell out of favor. The timing worked well as few good sites for hydropower dams remained. 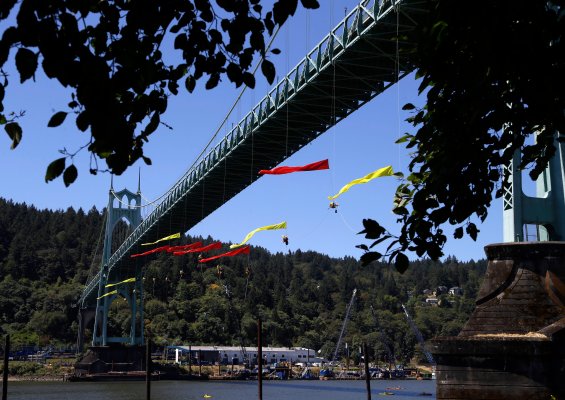 Greenpeace Protestors Dangle Off Bridge to Stop Oil Ship From Leaving Portland
Next Up: Editor's Pick