Athlete Greg Louganis on His New Documentary: 'I Was Thinking I Was Not Going to See 30'

One of the most prominent American athletes of the 1980s, Greg Louganis is back in the public eye—and he’s hoping to show the average TV viewer that he’s really just like you.

With Back on Board: Greg Louganis, airing August 4 at 10pm ET on HBO, Louganis opened up his complex life to a documentarian’s camera. The diver, who competed in the 1976, 1984, and 1988 Olympics (winning four gold medals in the process), declared he was HIV-positive after his final Olympics, causing a controversy over the blood he spilled after an injury. He’s also undergone a series of personal challenges, including financial hardship coinciding with the 2008 financial crisis.

Back on Board depicts Louganis taking gigs for cash, including a job judging a diving competition; we also see him recounting the path that brought him to fame first as one of the world’s top athletes and then as one of the earliest out gay celebrities. Louganis spoke to TIME about the film and what he’s learned through a life in public.

TIME: How would you evaluate sports’ openness to gay people today?

Greg Louganis: We’ve come so far—I point to Matthew Mitcham, the Olympic gold medalist from Australia. He came out because he felt that he couldn’t compete on that high level only sharing a part of himself and having to hide. I thought that was so incredibly admirable. And, of course, that paved the way for Tom Daley from the U.K. to come out.

I was fearful back in the ‘80s, because I didn’t want it to be about “The Gay Athlete.” It was just my policy not to discuss my personal life with members of the media. I also grew up at a time when it was okay. The sports reporters were respectful of that. If you read between the lines, it’d be pretty easy to figure out my sexual identity. It was a different time; we’ve come a long way.

Do you feel envious of younger athletes, or regret that the times were different when you were competing?

I don’t have any regrets; I really don’t. Every person, even today, whether you’re LGBT, straight, it doesn’t matter, an individual, has their own journey. I think it’s great that we’ve come so far. As I’m mentoring young divers for USA Diving, a lot of our youth see sexuality as more fluid. They resist the labels. Even “LGBTQ”—they don’t want the labels. They get it a lot better than the older generation. It’s great; I know that we have a lot of work left to do, especially around the world.

Between you, Mitcham, Daley—is there something about diving that makes it more conducive to gay star athletes? Michael Sam, for instance, is out, but did not end up playing in the NFL.

There have been Michael Sam, Jason Collins, Robbie Rogers—people that have come out in team sports. Back in 1995 when I was on a book tour, a lot of young people in sports told me that they wanted to come out but were afraid to, because of the ramifications for their team. And that’s just what it is: A team sport. It’s easier if you’re competing in an individual sport, because, really, it’s just you that’s out there. But I think it’s changing, it’s evolving, and people are finding they have a lot more allies.

I can’t recall having seen a documentary about an athlete that was so frank about its subject’s reality; you really open up. What was the process by which you decided to grant so much access?

The producer read an article in 2010 about my making my way back to USA Diving and said “Greg Louganis: I didn’t know he ever left!” So he reached out to Cheryl Furjanic, the director who made Sync or Swim, a documentary about synchronized swimming. They came into my life at such a tumultuous time. I was on the verge of potentially losing my house. The one thing I learned from [memoir] Breaking the Surface is, I thought I was sharing my weaknesses. By sharing my weaknesses, I was actually sharing my strengths. With Back on Board, I wanted people to know that they weren’t alone. This was happening all over the country. It was all very classic: 2006, black mold scare, then contractors taking advantage of people in that situation, then Countrywide loans bought up by Bank of America, and people losing their homes!

The story is bigger than yourself, you’re saying.

It’s so important for people to understand, You’re not stupid: other people have made the same mistakes. And you’re not alone, because this could happen to an Olympic gold medalist, too! I’m not immune. Just because I had some success in one area of my life does not mean I’m going to have success in all areas of my life. That’s the reason why the mentoring is so important to me, because most athletes, once they finish their career in their chosen sport, they’re still pretty young. And so then it’s like, Now what? If they retire from their sport, you lose a part of your identity, of who you are. And a lot of athletes struggle with that.

When you go to the Olympic Games, that is the pinnacle. That is such a high high. Whether you’re successful or not, it’s still a high. But then the fallout after that is a low low. People talk about the post-Olympic blues. I tried to commit suicide, I battled depression, but it was in the back of my mind that this was kind of normal and to be expected. That’s why I’m most interested in the after-care. Kids need guidance of who they should trust and what questions they should ask. I’ve learned through trial and error—a lot of error on my part!

Was returning to USA Diving complicated for you, given the retroactive controversy over your bleeding in the pool during the 1988 Olympics, when you knew you were HIV-positive?

I don’t read my press. I started that years ago. My first Olympics was when I was 16. My mom was my proofreader. If an article was written, she’d say, “Oh, Greg, read this one, they had nice things to say,” so I could be in gratitude, so if I ran into that reporter again, I could say thank you and be gracious. The other stuff: Forget it. But when I came forward about my HIV status with Barbara Walters and Oprah, there was a lot of debate going on and I bore the brunt of criticism. I didn’t mind that, because people were talking. All of those people who cheered for me during the Olympic Games can no longer say their lives have not been affected by HIV/AIDS. And so it really got people to think and talk about this issue and bring some focus to it.

That’s one thing that film really illustrates. When it shows me in 1988, an atomic bomb could have gone off and I wouldn’t have known it. But at the same time, ACT UP was happening, and people wanted people with HIV/AIDS to be tattooed and quarantined. That was a lot of people’s mentality.

It’s almost as though you were so involved in athletics that you missed early activism, but, for lack of a better term, perhaps you made up for it by raising awareness later on?

Putting things in a timeline and into perspective: I retired after the 1988 Games, and after that, I was thinking I was not going to see 30, because HIV/AIDS was a death sentence, and I was also in an abusive relationship. And so I was trying to extricate myself from that relationship, which took a lot of energy, and focus, and courage, and so that’s where my focus was in getting out of that relationship. A lot of the things kind of make sense; I couldn’t really focus on being an activist, because I was just trying to get myself together and get out of this as a whole person. Now, I can look back on those experiences, however horrendous, those are the gems of my life, because that’s taught me empathy. I can be empathetic to people who are in similar situations. This opened up a line of communication that is impactful and meaningful.

Do you look back on your younger self, achieving at such a high level while keeping so much hidden, as a different person entirely?

I look back, and all I have to do is see snapshots of the 1988 Olympic Games, our farewell dinner. Each of the Olympians shared a story about their experience. I got up, received my ring, turned to my coach, and said, “Nobody will ever know what we’ve just been through.” And I just broke down. Because I truly thought I was taking this to the grave. I didn’t know how much time I had. It was so raw and emotional, and he understood. It was just an incredible moment that nobody knew. Nobody had any idea or clue.

Now I’m 55, and I’m here, and I’m married. It’s unbelievable. I never dreamed this day would be possible. People always ask “How are you doing? How are you doing really?” But my viral load’s undetectable, my T-cells are higher than they’ve ever been. I do acupuncture and Eastern treatments as well. There’s so many things happening in my life, and Back on Board is another stepping stone. 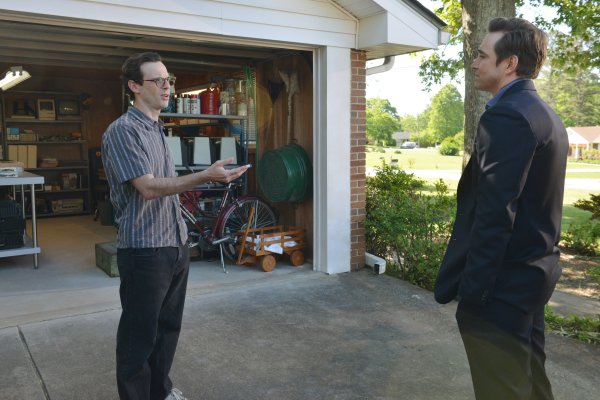 Halt and Catch Fire Became the Next Mad Men When It Stopped Trying to Be
Next Up: Editor's Pick