The Life Awaiting Jonathan Pollard After His Release

While it’s confirmed that Jonathan Pollard will indeed get out of prison on Nov. 20, where he will go from there is not at all clear.

He would be more than welcome in Israel, the country he was convicted of spying for in 1987. But the U.S. Parole Commission, which on Tuesday announced approval of his parole after almost three decades, requires that a parolee remain not only in the United States, but in a specific area, and check in regularly with a parole officer. The terms of Pollard’s release requires him to remain in the United States for a total of five years, and his attorneys say they have already secured him accommodation in New York City.

But Pollard’s lead attorney says he’s hopeful an exception will be made in this case. “I think the parole commission will work out what kind of travel terms are permitted,” Eliot Lauer tells TIME. “We haven’t worked that through with them.”

A hero’s welcome is not all that awaits Pollard in Jerusalem. So does the woman he married in prison, and has never seen alone. Pollard’s first wife, Anne, served three years for her role in the espionage case – he proposed with a ring his Israeli handler had offered in payment — then was divorced by Pollard in 1990 after her own parole was completed. Three years later Pollard secretly exchanged vows with Esther Zeitz in Butner Federal Correctional Complex in North Carolina. A Canadian, she emigrated to Israel, where they had met during an extended student trip in 1971. She has been an activist for his release, once going on a 19-day hunger strike, but, as the website Jonathanpollard.org plaintively notes, has never been allowed a conjugal visit.

“I can hardly wait,” Esther Pollard said in front of cameras in Jerusalem on Wednesday, after meeting with Prime Minister Benjamin Netanyahu. “I am counting the days, the hours, the minutes, the seconds until I can take him into my arms and we can close the door on the past behind us, and begin to heal and to rebuild our lives.” She asked for “a bit of privacy, and..to be able to begin to live like normal people, in a quiet and modest life.”

But the Jonathan Pollard sentenced to life in prison almost 30 years ago was not what some might describe as a normal person. The CIA in its “Damage Assessment” of his case outlined a personal history “replete with incidents of irresponsible behavior that point to significant emotional instability.” For example:

His activity as a spy was not meager; as a civilian analyst employed by U.S. intelligence, prosecutors said he handed over to Israel enough documents to fill a room six-feet wide, by six-feet deep and 10-feet high. The Naval investigator who led the case wrote that Pollard also gave U.S. secrets to South Africa, and Australia, and made overtures to Pakistan.

But he grew religiously observant in prison, and became an Israeli citizen in 1995. Esther Pollard’s voice cracked as she thanked “this whole beloved, beautiful nation that’s stood with us all these years.” Pollard’s lawyer dismissed the notion that he had “transitioned” from American to Israeli during his three decades of incarceration.

“I wouldn’t say there’s been a ‘quote’ transition,” Lauer said. “He’s American. He’s a patriotic American. He violated American law, and he served 30 years for doing so. And obviously he’s very attached to Israel as well.”

Just how attached will become clear when Pollard walks free in the fall. 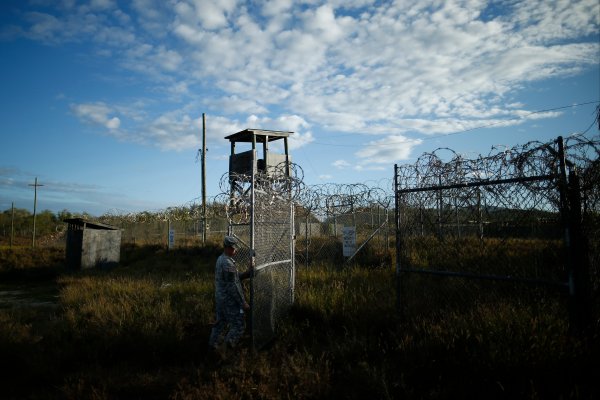 Plan to Close Gitmo Prison in the Works
Next Up: Editor's Pick