Why Big Game Hunters Believe They're the Real Conservationists

Animal lovers around the world have united in outrage against Minnesota-area dentist Walter James Palmer, 55, after news broke that he stands accused of killing Cecil the lion, a popular attraction in one of Zimbabwe’s national parks.

The government in Zimbabwe has alleged that Palmer’s actions were illegal because of issues with permitting and other practices Palmer and his guide used to pursue the lion. But Palmer is far from the only American trophy hunter to head to Africa to hunt big game.

Every year thousands of trophy hunters primarily from North America and Europe travel to the Africa to try their luck at killing a highly-coveted trophy animal, often threatened species such as lions and elephants. In total, 9,000 trophy hunters travel to South Africa alone annually, according to one estimate. Prices start at a few hundred dollars for small animals like wild pigs but can reach tens of thousands of dollars for big game such as leopards, elephants and buffalo.

Read more: The Lion-Killing Dentist Is Getting Totally Savaged Online

Although the practice may sound cruel, hunters say their efforts actually support conservation through large fees paid to governments to engage in the hunt. “Hunters are the true conservationists,” said Dave Duncan, an adviser and coordinator for hunting safaris. “If it weren’t for hunters, there probably wouldn’t be any animals left in the United States.”

Duncan and others are quick to cite president Teddy Roosevelt as an example of an avid hunter who killed thousands of animals while also believing strongly in conservation. Hunters are required to follow strict guidelines and exercise self-restraint when it comes to killing animals, Duncan said. Furthermore, he adds, much of the thousands or even tens of thousands of dollars paid in fees to government authorities actually aids conservation efforts.

For instance, South African Sky Hunting, which offers tours in countries like South Africa, Namibia and Botswana, charges $42,000 for an elephant-hunting expedition. A lion expedition costs $23,000 and a hippopotamus expedition will set you back $9,400. Much of those fees should, at least in theory, go back to conservation efforts. “The loss of one is better for the group,” Duncan said. “You take a single animal out and all that money goes right back into saving the rest of them.”

But some conservation groups say the killing of any animal for sport is unacceptable. Jeffrey Flocken, who leads the International Fund for Animal Welfare’s North American branch, says much of the money that supposedly benefits conservation efforts winds up in other places. “This philosophy—that you have to kill an animal to save it—does not make sense morally, economically, biologically, or from a conservation-incentive point of view,” he has written.

Other organizations, like the World Wide Fund for Nature, don’t rule out trophy hunting in all circumstances but call for it to be used very narrowly. In response to a question about trophy hunting on its website, the organization writes that “WWF accepts or supports hunting in a very limited number of contexts where it is culturally appropriate, legal and effectively regulated, and has demonstrated environmental and community benefits.”

That wasn’t the case for Cecil, who was allegedly killed after being lured away from a protected habitat onto private land. The landowner lacked proper permits, the government alleges, and the killers removed the animal’s collar. For lions especially, the loss of even one animal can have wide-ranging effects on lion society and lead to many more deaths down the road, says David Macdonald who runs Oxford University’s Wildlife Conservation Research Unit. “The shooting of one male lion, such as Cecil, can lead to the collapse of his coalition and the deaths of his brothers,” said Macdonald.

For hunters, this debate may all be irrelevant. Duncan calls the popular lion’s death a tragic “aberration” by irresponsible guides; most hunters, he says, are careful to follow applicable laws and regulations. “Ninety-nine percent of hunting is a great, great sport and a great hobby to have,” he says. “It’s a lifelong hobby.” 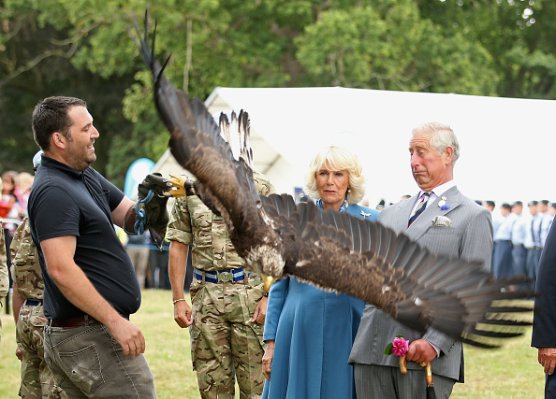 See an Eagle Try to Fly Away From Prince Charles and Camilla
Next Up: Editor's Pick