Who's Really Responsible for the Killing of Zimbabwe's Lions and Other Wildlife?

Earlier this month, a 55-year-old American dentist named Walter Palmer went on a safari holiday in western Zimbabwe, where, over a 40-hour period, he maimed, cautiously tracked, and finally killed a lion. Palmer, a veteran big-game hunter, insists that he had secured the necessary hunting permits, unaware at the time that his target was the most famous lion in Africa.

Hwange National Park is Zimbabwe’s oldest and largest wildlife reserve, and the lion Palmer killed was its star attraction. It even had a name: Cecil. For killing Cecil, Palmer has become a figure of global hate, and the lion depicted not so much as a bloodthirsty killer himself but a sort of cuddly mascot, who would affably tag alongside caravans of delighted tourists. #CecilTheLion was a top trending topic on Google and Twitter around the world throughout Tuesday — although nobody seemed to notice that he bore the same first name as the now reviled British adventurer and colonizer Sir Cecil Rhodes, who founded the white settler state of Rhodesia, as Zimbabwe was formerly known, and whose statue was recently pulled down in Cape Town.

The press has obligingly cast Palmer as a leering sadist and gone to great lengths to unearth alleged past wrongdoing unrelated to his hunting hobby. Prominent journalist Piers Morgan said that he wanted to hunt “fat, greedy, selfish, murderous businessmen like Dr Palmer” (who is neither fat nor a businessman) and then “skin him alive” and “cut his head from his neck.” Sharon Osbourne tweeted of her hope that he “loses his home, his practice & his money” (before noting: “He has already lost his soul”). Cara Delevingne called him “a poor excuse of a human being.”

The Yelp page of Palmer’s Minnesota dental practice has meanwhile become a catalog of ad hominem attacks. “Brought my lion here for dentistry and was horrified by the result,” one user wrote. “All kidding aside, I hope you die painfully.”

Faced with a shrieking, global witch hunt of this magnitude, Palmer, understandably, has mostly been incommunicado since the maelstrom began, but as repulsive as his hobby may be to many, it is indisputable that tourists such as him are not the real reason Zimbabwe’s precious wildlife is being decimated. To understand that, one has to look at the ruinous land-management policies practiced by the Mugabe regime over the past 15 years.

It is no accident that one of the two men who accompanied the dentist on the safari, and who have now been arrested, was a farmer (the other was a professional hunter hired by Palmer as a guide). State wildlife officials claim that Honest Trymore Ndlovu helped lured the lion off the wildlife reserve and onto his property, Antoinette Farm, where the beast was killed.

Why would he do such a thing? Perhaps because he is a farmer in a country where agriculture is an industry of destitution. Zimbabwe was once celebrated as the “breadbasket of Africa,” whose fertile earth supplied the world with abundant tobacco, corn and wheat. Today, 76% of its rural population lives in abject poverty, dependent on foreign food aid and desperate measures — like the poaching of the wildlife that inhabits its otherwise barren lands, or rendering assistance to those who want to hunt or poach.

In 2000, Zimbabwe President Robert Mugabe enacted a disastrous land-reform policy. Farms were divided up and nationalized and many plots were handed out to generals and ministers. Thousands of white landowners were violently evicted from their farms, which were then parceled into smallholdings and given to black Zimbabweans. The destruction of property rights led to a disintegrating economy and widespread poverty. Poaching — to feed the insatiable demand for rhino horn and ivory in China and other parts of Asia — became rife and much of the wildlife in Zimbabwe was simply wiped out.

Until 2000 Zimbabwe had a successful wildlife-management program, with many big-game animals flourishing. But by 2003, a staggering 80% of the animals that had lived on Zimbabwean safari camps (which employed firm quotas to regulate animal population sizes) had died. By 2007, there were only 14 private game farms in the country, compared with 620 prior to the land seizures of 2000, according to a National Geographic report. With the protection of private game reserves nearly nonexistent, once abundant wildlife began dying off, hunted by desperate farmers with no other options for sustenance.

Despite the passing of harsher laws for poachers in 2011 illegal hunting in Zimbabwe is still big business. Poaching syndicates earn hundreds of thousands of dollars exporting ivory and animal skins. Many conservationists believe allowing the community to reap the benefits of wildlife management — by, ironically, running the sorts of safaris on which Palmer shot his lion — will help curb illegal poaching. But it is impossible to have that debate while the world brays for the ruin of a lone Minnesotan dentist, and fails to criticize a regime whose policies were responsible for the almost complete extinction of Zimbabwean wildlife in the first place.

— With reporting by Helen Regan 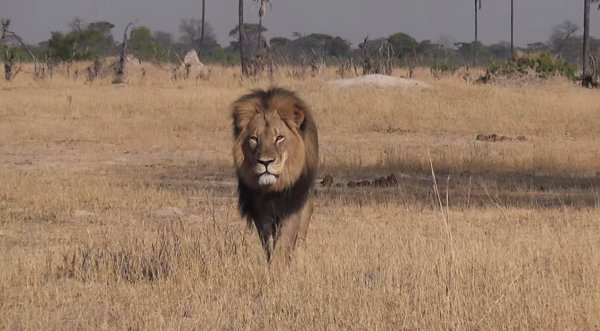 Authorities Hunting for Spaniard Who Killed Famous Lion
Next Up: Editor's Pick