You Asked: Is It Bad to Hold in a Sneeze?

Spend some time reading medical case studies—a great way to ruin a pleasant morning, by the way—and you’ll be shocked at the unlikely ways people manage to hurt themselves. Focus on sneeze-related accidents, and you’ll notice a trend: Bad things happen when people hold in their sneezes. A fractured larynx, acute cervical pain and facial nerve injuries are just a few of the documented mishaps caused by a stifled achoo.

“I’ve seen patients with a ruptured eardrum or pulled back muscles, and you hear about cracked ribs,” says Dr. Michael Benninger, an otolaryngologist—that’s an ear, nose and throat doctor—and chairman of the Head and Neck Institute at Cleveland Clinic.

While sneezes (and the schnozes that expel them) come in many sizes, a whopper sneeze can blast air out of your nose at 500 miles per hour, Benninger says. If you redirect that force inward, your suppressed sneeze can send waves of force rippling through your head and body.

MORE: Don’t Sneeze In Space: When Astronauts Get Sick

Usually that’s not a big deal. After all, most of us have bottled a sneeze here or there without issue. But Benninger says a preexisting musculoskeletal injury or weakness, odd ear or throat physiology or some other anatomical quirk could lead to an adverse reaction to a held-in sneeze.

While such reactions are unlikely, Benninger says sneezes aren’t meant to be caged. “Sneezing probably cleanses the nose of irritants, viruses and those types of things,” he explains. He uses the word “probably” because there’s research to suggest sneezing might perform other functions, from signaling to people that you’re sick to resetting the homeostatic environment in your nose.

“I’ve read reports that people sneeze differently in different cultures—almost like a learned behavior,” he says. He adds that everything from your lung capacity to the structure of your face and nose can play a role in how forcefully you sneeze, and the potential of your sneeze to cause or exacerbate an injury.

His advice? Don’t hold in a sneeze. “If you feel one coming on and you want to stop it, rubbing your nose can help,” he says. For patients who may feel pain when sneezing—those who’ve recently undergone surgery or broken a bone—Benninger advises opening your mouth wide to minimize a sneeze’s strength. “It’s like forcing water through a pipe,” he says. “If the air can escape through your nose and mouth, that creates less pressure than forcing it through a smaller opening.”

Just make sure that when you sneeze, you’re doing it into the crook of your arm, not your hand. “We know sneezing can project smaller particles 10 to 12 feet, so it’s important to cover your mouth,” Benninger says. “But if you sneeze into your hand, everything you touch is going to be contagious.” Your clothes help absorb particles, and you probably won’t be touching much with the inside of your arm, he adds.

Gesundheit! And safe sneezing, everyone. 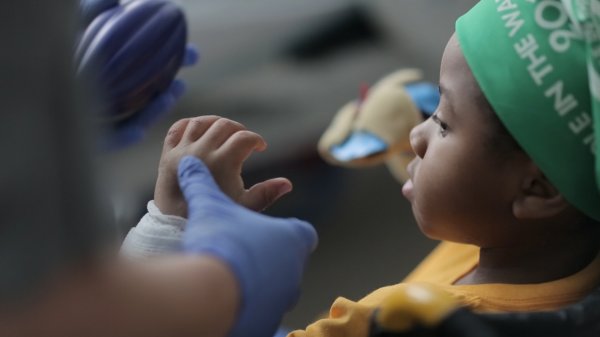 Watch This Amazing Child Get a Bilateral Hand Transplant
Next Up: Editor's Pick