A conservation group in Zimbabwe has named a dentist from Minnesota in the illegal killing of a beloved male lion.

U.S. citizen Walter James Palmer allegedly paid $50,000 to kill Cecil, a 13-year-old male lion, on a game-hunting trip, according to a report from the Zimbabwe Conservation Task Force. Zimbabwe authorities also told the Associated Press that Palmer was the individual accused of slaughtering the beast.

Palmer said in a statement that he had hired guides to secure permits and that his hunting expedition was “legal and properly handled and conducted.” He has not been contacted by authorities, Palmer said.

“I had no idea that the lion I took was a known, local favorite, was collared and part of a study until the end of the hunt,” he said via email. “I relied on the expertise of my local professional guides to ensure a legal hunt.”

The hunter’s two accomplices have been apprehended by police and await a court hearing, the country’s government said. “Ongoing investigations to date suggest that the killing of the lion was illegal since the land owner was not allocated a lion on his hunting quota for 2015,” the Zimbabwe Parks and Wildlife Management Authority said in a statement. “Therefore, all persons implicated in this case are due to appear in court facing poaching charges.”

Palmer and a guide, Theo Bronkhorst, allegedly entered a national park where lions are protected on July 6 and lured Cecil from the park by tying a dead animal to the back of their car. They shot him first with a bow and then a gun when he didn’t die immediately, according to the conservationist group’s report. Though the hunters had left the protected park, they still lacked proper permits, the conservation group said.

Cecil was a draw for tourists visiting the country’s Hwange National Park and the subject of research conducted by Oxford University’s Wildlife Conservation Research Unit. David Macdonald, Oxford University professor who runs the center, condemned the killing as “reprehensible and unacceptable.” In turn, Cecil’s shooting will likely result in the death of many other lions that depended on Cecil, he said.

Palmer is an avid big-game hunter whose hunting successes landed him attention in a 2009 New York Times story on the sport. He was previously convicted of bear poaching in Wisconsin, according to the Minnesota Star Tribune. 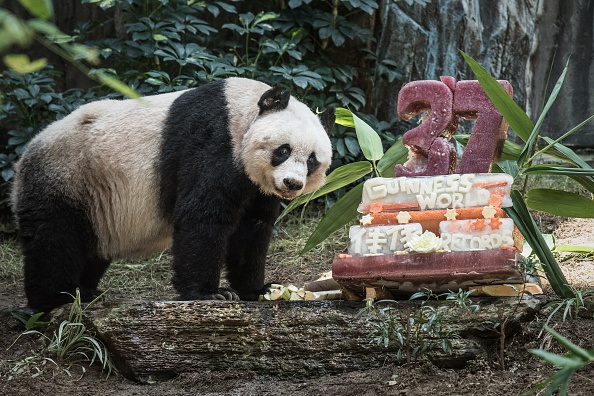 See How the World's Oldest Panda Celebrates Her Birthday
Next Up: Editor's Pick