Jozef Czarnocki, owner of a popular Warsaw bar, is biting an apple and hoding a bottle of Polish cider to show his support for Twitter campaign "#eatapples to spite Putin", in Warsaw on July 31, 2014.
WOJTEK RADWANSKI—AFP/Getty Images
By Joanna Plucinska

Polish brewer Tomek Porowski knew he was taking a gamble when he opened his business in 2011. In a country obsessed with pure, strong vodka, he decided to produce, a light, sweet, low-alcohol beverage — apple cider.

“I couldn’t afford to start a winery, so I decided instead to start [making] cider,” Porowski tells TIME. With his friend Marcin Hermanowicz, who lives in Grojec, the orchard capital of Poland, they launched Cydr Ignacow with the intention of selling it to a small city-slicker niche.

Their business was a success, and as their cider started appearing in more bars and restaurants with each passing year, so other brewers were inspired to start their own craft cider operations. Porowski feels like he has sparked a trend much larger than what he initially intended — and he has Russia to thank for it.

After Warsaw criticized Moscow’s actions in Ukraine in 2014, Russia banned some Polish exports, including apples. Surplus fruit piled up, and the consumption of apples became something of a nationalist duty, spurred by its own Twitter hashtag, #eatapples. Poland’s newfound love of cider was born in this climate. Sales of the beverage have almost quadrupled in the past year alone, according to Malgorzata Przybylowicz-Nowak, the editor in chief of the website Kraina Cydru, or Land of Cider.

“Cider producers took definite advantage of the national outcry against the embargo,” Iwona Chromiak, a spokesperson for Poland’s Ministry of Agriculture, told TIME in an email interview. “The embargo directly led to the popularity of cider.”

To some, it’s no surprise that Poland would eventually become a good market for cider. After all, Poland produces more apples than Italy does grapes, explains Agnieszka Wozniak of Ambra, one of Poland’s biggest distributors of wines and alcoholic beverages.

The beverage had to overcome an image problem first. To Poles who grew up under communist rule, fizzy alcoholic beverages made from apples, known as jabolami, were the epitome of socialist shabbiness, drunk only by misty-eyed seniors lamenting the days of Gomulka and Gierek.

Even a few years ago, this reluctance to accept cider was marked. According to a 2013 KPMG study done on the Polish alcohol market, Poles consumed over 4 billion liters of alcohol a year, with beer and vodka constituting almost 80% of that total. Only 11% of the population drank cider with anything approaching regularity.

In the past two years, this number has shot up. The cider market increased from $6.63 million to $21 million, according to the Ministry of Agriculture. Ambra started mass-producing ciders like Cydr Lubelski in the summer of 2013, selling them in stores throughout the country. Przybylowicz-Nowak says she is expecting Poles to drink over 80 million liters of the beverage in the coming years — although that number still only represents about 2% of Poland’s total beer market, Wozniak says.

To gain greater market share, cider makers like Kamil Mazuruk, the owner of Dzik Cider, are counting on the drink’s appeal to young people, for whom the drink doesn’t have cheap connotations. “Hipsters are a good channel of communications — they brag about the brands they like,” says Mazuruk, who has been selling his product to trendy bars and restaurants in Poland’s bigger cities, like Warsaw and Krakow.

“We see big potential here, because more young people born in 1991 don’t know what was there before,” he adds, making a reference to the year when Poland threw off Soviet rule. It seems that apples, nationalism and antipathy toward the Russians make for a distinctly Polish cocktail, however you decide to brew it. 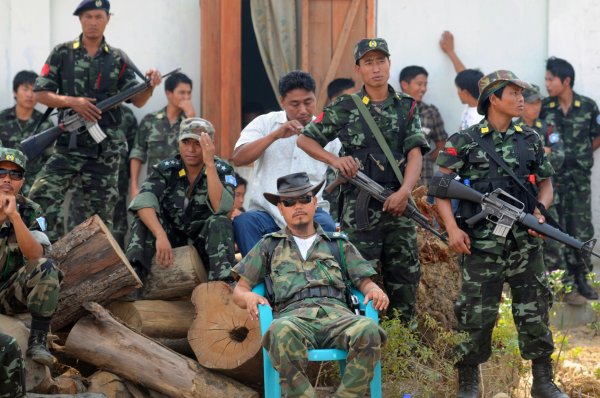 India Inks Peace Deal With Rebels
Next Up: Editor's Pick