The makers of Cheerios cereals and Nike sneakers will join the makers of iPhones and Ziploc baggies Tuesday in supporting proposed sweeping legislation that would ban discrimination against gay and lesbian Americans at their jobs, homes and schools.

Food conglomerate General Mills, Nike, American Airlines and Facebook were set to sign onto anti-discrimination legislation known as the Equality Act, the companies said in statements obtained by TIME ahead of their release. The corporate giants, long supporters of gay rights, are joining peers Apple, Dow Chemicals and Levi Strauss in lobbying Congress for that legislation. It was the latest sign that opponents of gay rights are finding themselves standing opposed to business interests. And while the public messaging is clear — the makers of such everyday goods want LGBT Americans to have easier everyday lives — there is an admitted financial interests in adding loyal customers to these brands.

“At General Mills, we have a long history of supporting LGBT equality and the time has come in this country for full, federal equality for the LGBT community,” said the food-maker behind Cheerios, Haagen-Dazs ice creams and Progresso soups. “Ensuring fairness in our workplaces and communities is both the right thing to do and simply good business.”

Indeed, it is that business case that has begun to break through. When Indiana lawmakers moved forward with a bill earlier this year that would have made it more difficult for gay and lesbian employees of major corporations to go about their daily lives, industry worked with liberal activists to beat back the legislation. Apple, American Airlines, Salesforce and the NCAA college leagues all threatened action unless Indiana lawmakers reverse course.

It’s a model that organizers are hoping to replicate with Congress.

Federal lawmakers now are considering a sweeping non-discrimination law that would bar individuals from being denied services — including housing and jobs but also mortgages and education — based on their sexuality or gender identity. Although the Supreme Court ruled that all Americans have the right to wed, regardless of whether the couple is heterosexual or homosexual, many gays and lesbians still face discrimination in their everyday lives.

More than 206 million Americans — nearly two thirds of the country — live in states where employers can fire someone for being gay. Only 18 states and the District of Columbia prohibit housing discrimination based on a tenant’s sexuality or sexual identity. Three others prohibit discrimination based on sexuality. The remaining 166 million Americans live in states where landlords can evict someone for their sexuality.

Polls find most Americans think these rights are already protected for LGBT residents. Activists and businesses are counting on that false but widespread belief to minimize political opposition that is fading in numbers but not in intensity for those who remain. Social conservatives are willing to buck the Wall Street wing of the Republican Party on this issue, and it is likely to be a driving factor as a crowded field of hopefuls vies for the 2016 GOP presidential nomination.

In crafting the bill, lawmakers consulted a coalition that included the NAACP, the NAACP Legal Defense and Education Fund and National Council on La Raza in the hopes of pitching the new legislation as a civil rights bill for the 21st Century. The American Civil Liberties Union, the National Women’s Law Center and the Human Rights Campaign also offered their advice.

The Human Rights Campaign, the nation’s largest civil rights group for LGBT Americans, has been aggressively lining up corporate backing, too. The lobbying group already scores major corporations on how well they serve their gay and lesbian employees and is enjoying momentum after a rapid expansion of public support for same-sex marriage. The group helped General Mills, Nike, American Airlines and Facebook come out in support of the proposals.

Nike, a global brand of sporting gear headquartered in Oregon, explained why it was backing the bill, co-authored by its home-state Sen. Jeff Merkley. “We believe that diversity drives innovation and allows us to attract and retain world class talent. We need fair and equitable laws that prevent discrimination,” the company said in a statement.

The nation’s largest airline in passenger traffic said it was good for morals as well as the bottom line. “We at American Airlines are proud of our long history of supporting LGBT equality,” the airline said in a statement. “Now is the time for full equality for the LGBT community in the United States.”

At the same time, Facebook said in a statement of its own: “Ensuring fairness in the workplace is a fundamental principle at Facebook and we support legal protections for LGBT Americans as outlined in the Equality Act.”

For the Human Rights Campaign, a million-dollar lobbying organization with a shining headquarters in Dupont Circle, the new allies were merely the most recent additions to its victories. Yet the group has shown no signs of receding after the marriage victory and is expanding its efforts to states to end their laws that sanction discrimination against LGBT neighbors.

“We are tremendously grateful to these corporate leaders for their support of the Equality Act and the basic principle that all Americans should be able to live their lives free of discrimination,” Human Rights Campaign President Chad Griffin said. “These companies agree: equality is good for business and the time for full federal equality is now.” 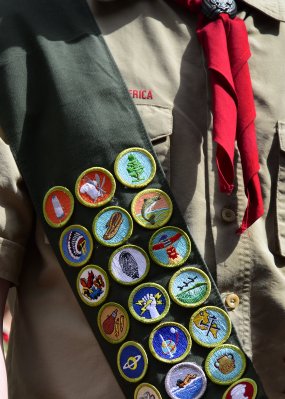 Mormon Church to 'Re-Evaluate' Relationship With Scouts
Next Up: Editor's Pick