How to Treat Jonathan Pollard in the Age of Edward Snowden

Ideas
By Seth Lipsky
Lipsky is the editor of the New York Sun.

The White House is denying that its decision to accede to the parole of Jonathan Pollard is animated by its hopes to assuage Israel in the face of the Iran appeasement, as the Wall Street Journal reported last week. My instinct is with the Journal, but, in any event, the thing to remember about Pollard is that he should never have been given a life sentence in the first place.

It’s not that Pollard’s breach of our Espionage Act wasn’t serious. It certainly was. But the charge to which he pled guilty comprised a single count of passing classified secrets to a friendly nation. In exchange for his plea, which saved the government the risk of losing in court or being forced to drop its case rather than disclose the secrets, the government made promises it failed to keep.

This came to a head in the early 1990s. Pollard was arrested in 1985. He pled guilty in 1986. He drew life in 1987. He sought to withdraw his plea in 1990. And the Appeals Court judges who ride circuit in the District of Columbia disposed of his claims in 1992. It was an incredibly distinguished panel, including Laurence Silberman, Ruth Bader Ginsburg, and Stephen Fain Williams.

Yet two of the three judges took what can only be described as a powder, casting Pollard into prison for what the law calls life (30 years) on the grounds that he didn’t appeal the life sentence in a timely manner. The memorable opinion in the case was the dissent of Judge Williams, who concluded that the government that put Pollard away had broken the promises it had made in return for his plea.

The promises were that it would bring to the court’s attention the value of Pollard’s cooperation, refrain from seeking a life sentence, and limit its allocution — its statements — regarding “the facts and circumstances” of Pollard’s crimes. Williams concluded that the government “complied in spirit with none of its promises” and, in respect of the third promise, “it complied in neither letter nor spirit.”

One of the points Williams marked was the government’s suggestion that Pollard had committed treason. That came in a memo to the court from the defense secretary at the time, Caspar Weinberger, who asked the Court to mete out a punishment reflecting the “magnitude of the treason committed.” Yet Weinberg and the Court knew that whatever Pollard did was not treason.

That’s because the Constitution prohibits Congress from defining treason as anything other than levying war against the U.S. or adhering to its enemies, giving them aid and comfort. Treason, Williams noted, carries the death penalty. It can be committed only with an enemy. The espionage statute to which Pollard pled encompassed aid to friendly nations and carried a maximum of life.

What Pollard did was bad enough; I have no desire to sugarcoat it. But the constitutional fact of the matter is that it stopped well short of treason. The government poisoned the very proceeding in which it had promised not to seek a life term. So Pollard went away for a longer stretch than America has ever given anyone for a similar crime. No one need feel shy about calling it an injustice.

Williams himself likened the government to the witches in Shakespeare’s Macbeth. He ended his opinion by quoting the famous curse against them — “And be these juggling fiends no more believ’d, / That palter with us in a double sense; / That keep the word of promise to our ear, / And break it to our hope.” In all my years covering the courts, I don’t think I’ve read an opinion quite like it.

How ironic it is that Pollard, who went away before the rise of the World Wide Web, will emerge from prison — if he does emerge — into the age of Wikileaks. Today our university campuses are lionizing those who have disclosed our secrets in a protest against what they see as abuses by the government. They fear the very government from which Pollard purloined his packets.

So what are all those who rode the high horse against Pollard going to do when Edward Snowden and Julian Assange are put in the dock? Pollard passed his secrets to an American friend. Assange ran a Web site that made our secrets available not only to friends but to enemies. Snowden did something similar, passing secrets to the press. They claim to be acting on high-minded principles. So did Jonathan Pollard. 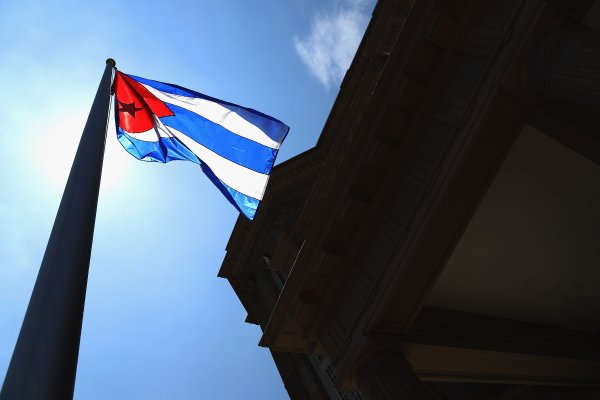 Former Cuba Diplomat: Flag Flying Over Cuban Embassy Is a Welcome Sign
Next Up: Editor's Pick