Migrants react after they couldn't find a seat on the train heading to the Serbian border, where they will migrate towards Western European nations, at the train station in Gevgelija, Macedonia, July 26, 2015.
Georgi Licovski—EPA
By Megan Gibson

American property mogul Jason Buzi says he has a solution for the global migrant crisis: a new country just for refugees.

“We have a lot of stateless individuals all over the world right now,” Buzi told the Washington Post in an interview. “The idea is, if we could give them a state of their own, at least they’d have a place to live in safety and be allowed to live and work like everybody else.”

“It’s almost shocking to me that nobody’s talking about this as a solution,” he added. Around the world, more than 60 million people have been displaced from their homes, with many living in large camps in poor conditions. State leaders, particularly in Europe, have struggled on how to address the influx of migrants into their countries.

Buzi claims he has already spent between $10,000 and $15,000 out of his own pocket setting up a team to promote the new state, which he calls Refugee Nation. The mogul suggests that an unhibited island owned by another state might be suitable for the new country. He’s also hoping to get support from heavy weights to get the state set up, saying, “If you’ve got Angelina Jolie, for instance, behind it, it’s going to influence a lot more people and get more people to know about it.”

But when it comes to how the newly created state would function — socially, politically and financially — Buzi says details will have to be worked out in the future. “Right now it’s a little like meeting a girl on a first date,” he told the Post, “I’m not thinking yet about what I’m going to name my children, right?” 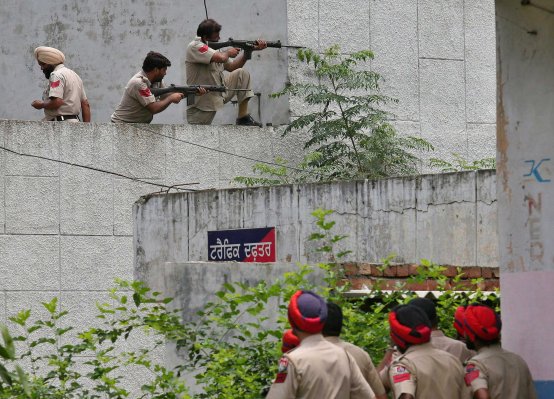 6 Dead as Gunmen Storm Police Station in India
Next Up: Editor's Pick