“We’re proposing a new rule that bans the sale of virtually all ivory across state lines,” Obama said at a press conference in Kenya.

Existing U.S. ivory regulations mostly concern the import and export of the material from the country, while allowing some legal trade of the material between states. The new regulation, which will be finalized later this year, would restrict interstate trade to antique items that are over 100 years old or contain a minimal amount of ivory. The proposed rule also contains new restrictions on the international trade.

Prior to the Saturday’s announcement, many animal conservationists had argued that allowing some legal ivory trade provided a cover for criminals who were actually selling illegal ivory. In a 2009 investigation, U.S. Fish and Wildlife Service officials seized more than a ton of ivory from a Philadelphia art store that had been manipulated to appear old enough to meet federal standards. Ivory from that seizure was destroyed at a “ivory crush” event in Times Square last month.

“By tightening domestic controls on trade in elephant ivory and allowing only very narrow exceptions, we will close existing avenues that are exploited by traffickers and address ivory trade that poses a threat to elephants in the wild,” said Fish and Wildlife Service Director Dan Ashe in a press release. “Federal law enforcement agents will have clearer lines by which to demarcate legal from illegal trade.”

Read More: Why Elephant Advocates Crushed a Ton of Ivory in Times Square

The announcement comes as conservation groups have warned about an increase in the prevalence of elephant poaching and a subsequent decline in the number of African elephants. Fewer than 500,000 elephants roam the continent today, and more than 50,000 are killed each year. After China, the U.S. is the world’s second largest market for ivory product sales, according to some estimates.

In addition to protecting elephants, the regulations will promote economic growth in Africa in the many countries rely on wildlife-based tourism, officials said. It will also aid the fight against terrorist groups that fund their efforts with money from the ivory trade.

“This is an issue not just about protecting elephants, but alleviating poverty, spurring economic growth, and fighting off people intent on destroying governments and terrorizing communities,” said Wayne Pacelle, president and CEO of The Humane Society, in an emailed statement. “Here’s a case where protecting wildlife is bound inextricably with core concerns about economic and national security.” 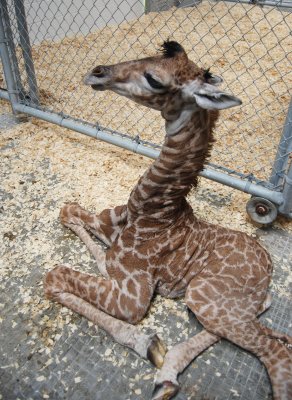 Meet an Adorable Baby Giraffe That Was Just Born at the Virginia Zoo
Next Up: Editor's Pick