In 2011, as Donald Trump was considering yet another White House run, he quietly changed his voter registration from a Republican to an independent. Publicly, the real estate mogul’s defection from the GOP was pitched as a protest against a roster of White House hopefuls he found unacceptable. Privately, Trump and his advisers were laying the groundwork for a potential third-party presidential bid in 2012 that never materialized.

These days, Trump is busy seeking the Republicans’ presidential nomination and preparing for the GOP’s first televised debate on Aug. 6. Yet, his advisers tell TIME, he is still considering a potential third-party bid. His advisers are consulting with veterans of Ross Perot’s 1992 and 1996 presidential campaigns and examining state-by-state requirements to get on the ballot. Cost estimates swing wildly, but most conversations end up in the $10 million ballpark—a fraction of what Trump might spend on a bid for the GOP nomination that is hardly certain.

“Why would Mr. Trump not consider all of his options?” one campaign adviser asks TIME.

Trump is atop national polls of Republicans and he seems to have captured the imagination of the GOP electorate during this mid-summer lull. His tough talk on immigration has endeared him to some conservatives, while his populist rhetoric has given him a shot at voters who are drawn to a political outsider who is promising the shake-up Washington. Much like the Tea Party movement of 2010, Trump is tapping into public angst and giving normally apolitical Americans a candidate that they see as an outsider above the petty politics.

Trump’s Republican rivals for the nomination have been openly criticizing him—especially his comments about Mexican immigrants and Sen. John McCain—in the hopes of ending his boomlet. But Trump’s poll numbers have yet to take a hit. “You’d think he would be done by now,” said one veteran political consultant whose firm is working for a Trump rival. “Not this guy. Every time he’s attacked, people like him more,” the adviser adds with begrudging admiration. “It’s a sign that a lot of Americans feel the way he’s talking.”

For his part, Trump says he prefers to run as a Republican, telling reporters Thursday that “I’m a Republican.” He went on: “I’m a conservative. I want to run as a Republican. The best way to win is for me to get the nomination.” But, he warned, if the GOP Establishment doesn’t start treating him better, he will bolt the party make a third-party go of it. That would likely siphon votes away from the eventual GOP nominee and hurt the Republicans’ chances of winning their first national election since 2004. If Trump’s followers stick with him, he could end up being a spoiler in a three-way race. In a way, his ire might hand the Democrats’ a rare, third-consecutive White House term.

Going the third-party route, however, would require Trump to concede the GOP nomination is beyond his grip—something that, for the moment, is not the case. If his polling slides in the coming months, however, the third-party route could be tempting if he can stomach the decision. “He would have to say to himself that he can’t win. And when has Mr. Trump ever done that?” said an adviser to one of Trump’s rivals.

Even if Trump decides to make a bid outside the two-party structure, there’s no guarantee he could win a spot on ballots. Every state has its own rules and idiosyncrasies that require careful management. In some states, getting on the ballot is as simple as filling out a form and writing a check. In others, would-be-candidates have to collect a requisite number of signatures from each county or each congressional district. It’s a hurdle meant to keep gadflies off the ballot and keep the focus on the two major parties. Even serious White House hopefuls come up short in their efforts; Rick Santorum, Rick Perry, Jon Huntsman and Newt Gingrich failed to qualify for the Virginia primary Republican ballot in 2012.

“I’m trying to run a campaign and all I’m doing all day is trying to get on ballots,” said Bay Buchanan, who managed brother Pat Buchanan’s 2000 bid. It was an all-consuming task as she fought tooth-and-nail to get his name listed beside Al Gore and George W. Bush. And that was even before critics were challenging her in court. She estimates that she collected roughly 190,000 signatures in Texas alone to make sure she passed the 100,000-signature requirement—and she still faced challenges. Every state, it seemed, was re-litigating the signatures the campaign submitted on petitions.

“My advice: recognize the enormous challenge that you face,” said the veteran political operative, who is not working on any presidential campaigns in 2016. “In some of these states, you have six weeks—not six months—to collect thousands of signatures.” Some of her best operatives collected 200 signatures a day, but most were snagging 100 to 125 signatures outside grocery stores and shopping malls, she recalls.

Buchanan is skeptical anyone is able to mount a credible third-party campaign under the current election laws, regardless of how much personal wealth a candidate is willing to spend. “It’s an injustice in our system, how difficult it is,” she said. “If it’s impossible, you’re not going to get the kind of quality candidates that you need to shake up the system.” 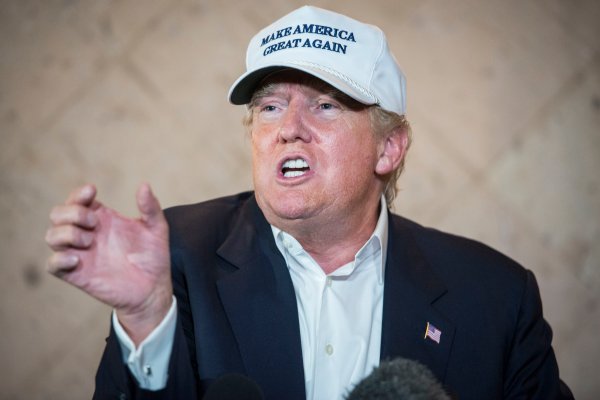 You Can Now Buy Your Very Own Donald Trump Baseball Hat
Next Up: Editor's Pick