Long before he opened fire in a crowded Louisiana movie theater this week, John “Rusty” Houser had a history of erratic behavior that scared his family—but he also had a strong interest in local politics, running for office in Georgia in the 1990s in an attempt to follow in his father’s footsteps.

People who knew Houser over the past two decades described a man who at times seemed untethered. He was easily excitable and passionate about political issues, and often highly critical of the local government. He also suffered from bipolar disorder and had a dark and unpredictable streak, leading many who knew him to be wary of him.

On Thursday, Houser stood up at a showing of Trainwreck in Lafayette, La. and, giving no explanation, fired 13 shots, killing two people and injuring nine others, before turning the gun on himself. He was living out of a motel for the months leading up to the shooting, and police described him as a lone drifter.

According to court documents, in 2008 his family got a protective order against him, citing mental illness and “various acts of family violence” (a domestic abuse complaint was filed in 2005). His wife, schoolteacher Kellie Houser, was so worried that she removed all the guns from their home and had him temporarily committed to a mental hospital. They later divorced, and he’s been estranged from his family since.

But things weren’t always this way. In the 1990s, Houser was an aspiring city politician in Columbus, Ga., hoping to follow in his father Rembert Houser’s footsteps. He was a fixture at community meetings in Columbus, now a town of about 200,000, and quick to weigh in on whatever topics were on the agenda.

“He did interviews, he ran for office, his dad was an elected official,” local Superior Court Judge Bobby Peters, who was then mayor of Columbus, told TIME. “I think he looked at himself as kind of a citizen’s watchdog, where he kind of kept an eye on government to make sure everything was done correctly.”

Peters added, “He didn’t trust government—he was always questioning everything we do.”

Houser dabbled in real estate development and owned two short-lived local bars, according to a now-deleted LinkedIn page with his name and photo. In 1996, he ran as a Republican for tax commissioner, mostly on the legacy of his father, who had previously held the office, as first reported by the Ledger-Enquirer. “He ran on his father’s name,” said Lula Huff, who won that election and is still serving as Columbus tax commissioner. “It didn’t matter what subject matter he discussed, it would always come back to ‘I’m the son of Rembert Houser.'”

Still, there were flashes of disturbed behavior. Houser was arrested for arson in 1989 or 1990, police said, one of several things that prevented him from being approved for a pistol license in 2006. (Police said late Friday that he bought the gun used legally at a pawn shop in Alabama last year, and that he visited the theater more than once before the shooting). Huff said she never received any threats during the campaign, but “citizens of the community told me to be cautious.”

Houser eventually dropped out of the 1996 race after he was caught removing Huff’s campaign signs from other people’s yards, Huff said. “Wherever I placed yard signs, he physically removed them,” she said. “When he was caught in the act by a police officer, he had more than 25 in his possession.”

Patti Meadows, a tax clerk who works in Huff’s office, knew Houser from when she worked for his father. The younger Houser would occasionally give her then-13-year-old son Darrick rides to church, and would frequently employ him to do odd jobs around the parish. But often Darrick would make up an excuse to avoid working with Houser. “He would come home and say ‘Rusty was not himself today,'” Meadows told TIME. “My son would tell him he had more homework” in order to go home.

“He talked fast, he moved fast, it was hard to keep him focused,” Peters recalled. “He just seemed like he had not found his niche. He was always searching for that niche and he wanted to be involved, he wanted to be in the forefront.” 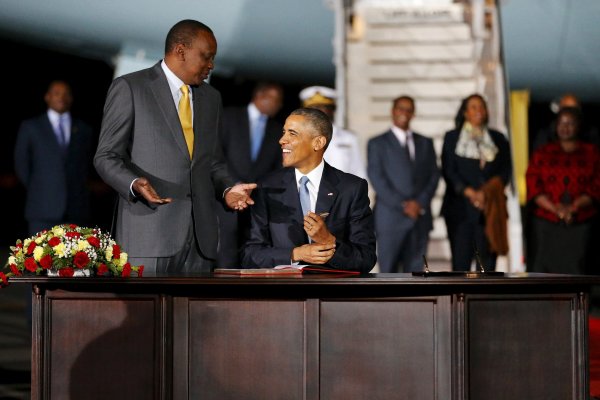