Police investigating the murder of a pair of British backpackers on an idyllic Thai beach have revealed that they didn’t check key CCTV cameras — the latest troubling admission in a case deemed an acid test for Thailand’s justice system.

Burmese migrant workers Wai Phyo and Zaw Lin, both 22, are currently on trial for the murder of David Miller, 24, and the rape and murder of Hannah Witheridge, 23, on the Thai Gulf island of Koh Tao.

Both defendants deny the allegations, claiming they are scapegoats who were tortured into confessing by police seeking to safeguard the coral-fringed island’s vital tourism industry. Police deny any mistreatment.

Human-rights groups have also raised concerns that the defendants are being railroaded because of their vulnerable status as migrant workers.

Friday marked two-thirds of the way through the 18-day trial, which is split into three equal parts on Koh Tao’s neighboring island of Koh Samui, and proceedings so far have offered little to suggest that Thailand’s reputation for fumbling justice is undeserved.

On Wednesday, Police Colonel Cherdpong Chiewpreecha told the court that nobody examined CCTV footage of a boat leaving the island around an hour after the presumed time of the murders. “We have the footage, but we never checked it,” he said, according to Sky News.

Cherdpong also conceded that officers never investigated rumors of an altercation between Witheridge and a young Thai man in the AC Bar, a late-night drinking hole where both she and Miller were last seen prior to the discovery of their bodies. The defense maintains this same man may have committed the crime before fleeing the island on the boat.

Additionally, no fingerprints or DNA tests were performed on the suspected murder weapons — a wooden club and garden hoe found near the bodies — as investigators did not believe such tests would be useful following a cursory examination of the objects with a magnifying glass. (The items of evidence were brought into court in a supermarket shopping trolley, reports the Guardian.)

The revelations were met by gasps in the courtroom, where both representatives of the victims’ and defendants’ families were present. The prosecution case hinges on DNA samples from the defendants that purportedly match those retrieved from Witheridge’s corpse.

On Friday, the bench finally permitted defense lawyers to request independent retesting of all DNA evidence. However, police have already said that key DNA evidence collected from the victims had been “used up.”

Given that Thailand welcomes 25 million tourists each year, the case has unfurled in the full media glare, with foreign press outnumbering domestic. Coverage has still been spotty, though, not least because, as is common in Thailand, reporters have been barred from taking notes inside the courtroom.

According to Andrew Drummond, a British journalist who covered court cases in Thailand for 25 years, this is because any “note-taking will invariably differ with the official version.” However, in Thailand the judge takes the notes himself rather than using a designated court transcriber. “The system is open to all sorts of abuse and misuse,” adds Drummond.

Several international media outlets have also complained of being unable to find translators as prospective candidates have been scared off by local thugs, adding weight to the theory that the murders have a criminal connection.

During the initial six-day segment of the trial, a Burmese man was brought in to act as court translator. However, the defendants protested, alleging he was among those who assaulted them during interrogation. Zaw Lin said the translator was present when police “put the bags on us and punched us,” reported the Bangkok Post. “I remember his voice.”

The translator was finally dismissed after the defense complained that he was also included on the prosecution’s list of witnesses. (He declined to comment on the allegations of abuse when contacted by TIME prior to the trial.)

Fears of mistreatment were not eased when the defendants complained that they were forced to sleep in their shackles following an earlier court appearance, as no official was around to remove the chains.

“The police are terrible and unjust,” Wai Phyo told TIME in Koh Samui Prison prior to the trial. “And the judge will just act to try and protect his country.” 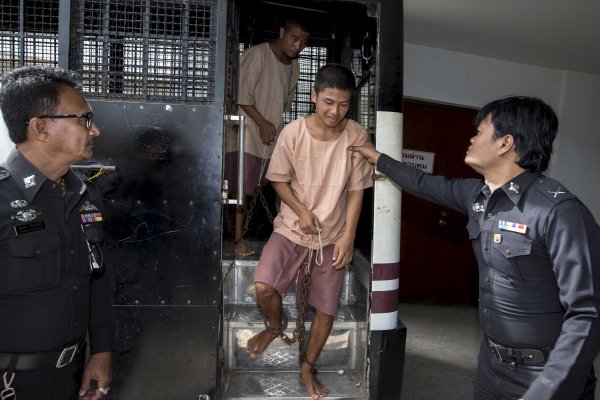 This Septic Isle: Backpackers, Bloodshed and the Secretive World of Koh Tao
Next Up: Editor's Pick