Republican presidential candidate Donald Trump paid a visit to the U.S-Mexico border Thursday, where he refused to apologize to those he offended when he suggested that many of those who have entered the country illegally are “rapists.”

“They weren’t insulted,” Trump said, “because the press misinterprets my words.”

Trump said Thursday he was “treated very nicely” during his visit to Laredo, Tex., but said he was not changing any of his positions after the trip — he still believes that the nation needs a border wall, which he has claimed he will force Mexico to pay for.

“We were treated so nicely,” Trump told reporters. “We learned so much in such a short amount of time.”

Flanked by a half-dozen private security guards, as well as local police officers, Trump maintained that visiting the border was a hazardous move. “Well they say it’s a great danger, but I have to do it,” he told reporters shortly after stepping off his Boeing 757 jet. “There is great danger with the illegals…there is a tremendous danger from illegals from the border.”

But it was an assertion rejected by Rep. Henry Cuellar, the Democratic representative from Laredo, who told TIME the truth is anything but. “When he talks about violence, Laredo had 3 murders per 100,000 [in 2013], as opposed to Washington, D.C., where he wants to have a new job, where it’s 16 per 100,000. If you compare that to New York, where he lives, I can bet that Laredo is a lot safer.”

The city of nearly 250,000, is about 96% Hispanic, with 91 percent of residents speaking a language other than English at home.

Trump had planned to meet with the National Border Patrol Council Local 2455 Executive Board at the Laredo airport before touring the border and meeting with other members of local law enforcement. But the union backed out early Thursday.

Trump also responded to questions about his threat to run as a third party candidate should he feel mistreated by the Republican National Committee. “I’m a Republican,” he said. “I’m a conservative. I want to run as a Republican. The best way to win is for me to get the nomination.”

Trump is all-but-assured a spot on the first GOP debate stage in Cleveland in two weeks. 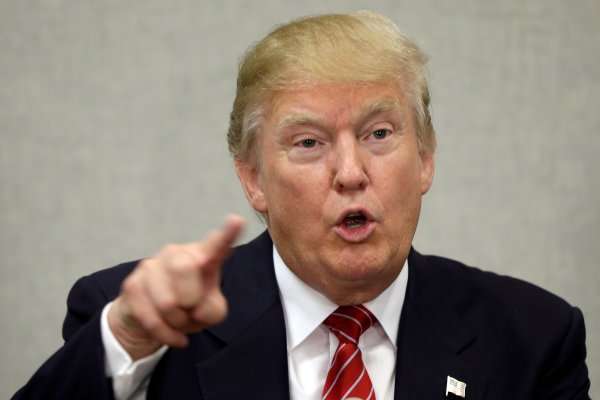 Can You Tell Who Donald Trump Is Insulting?
Next Up: Editor's Pick