Lost in Donald Trump’s wowza of a speech in South Carolina on Monday, where he revealed Lindsey Graham’s cell phone number, was his tiny mockery of Hillary Clinton. About 30 minutes into the speech, Trump asks: “Who would you rather have negotiate against China, for example? … Trump or Hillary?”

He then pursues his lips, leans to the right and waves his right hand as if he was one of his Miss Universe contestants, batting his eyelashes: “Hi, everybody, hi.” He then straightens and fires directly at Clinton, “She’s the one with the tone.”

It’s not the first time Trump has gone after Clinton by referencing her gender. “You know, she’s playing the woman card really big. I watched her the other day and all she would talk about was, ‘Women! Women! I’m a woman! I’m going to be the youngest woman in the White House! I’m not going to have white hair, I’m going to dye my hair blonde!’” he said in his first campaign speech in Iowa after announcing his candidacy earlier this month.

Given the tsunami of outrage Trump tends to inspire, it’s not surprising that his comments on Clinton have only made moderate waves. But what’s surprising is that he’s not the only Republican who has criticized Clinton for acknowledging that she is a woman. Earlier this week, Senate Majority Leader Mitch McConnell went after Clinton in the same way. “I don’t think arguing ‘vote for me because I’m a woman’ is enough,” the Kentucky Republican said at an event in his home state on Monday, according to The Associated Press. “You may recall my election last year,” McConnell said, referring to his Democratic challenger Alison Lundergan Grimes, whom he defeated by double digits in the 2014 midterm election. “The gender card alone is not enough.”

The Clinton campaign saw that comment as an opportunity. Perhaps waiting for the GOP to make the gender play, campaign aides quickly shot back with this sleek video where they literally play gender cards:

Echoing the video, Clinton responded to McConnell during a Facebook question-and-answer session. “Wow,” Clinton said. “Mitch McConnell really doesn’t get it. There is a gender card being played in this campaign. It’s played every time Republicans vote against giving women equal pay, deny families access to affordable child care or family leave, refuse to let women make decisions about their health or have access to free contraception.”

Republicans have always disdained identity politics, and playing to women is no exception. But McConnell risks misplaying his hand by comparing Clinton to his former opponent. Grimes had a relatively thin resume, Clinton has a record of championing women’s issues that goes back decades. “It’s just not true that she doesn’t have a record or that she’s running simply to be the first female president,” said Jennifer Lawless, director of American University’s Women & Politics Institute. “McConnell’s statement seems belittling and sexist.”

McConnell and Trump’s attacks open the door for Clinton to play to her strengths, reminding voters that the GOP record on women’s issues like equal pay, contraception and rape. President Obama won women in 2012 by 12 percentage points, one of the biggest gender gaps in history. As potential first female president, Clinton has the potential to expand that gap. “Hillary may be able to boost turnout among the groups of women that Democrats target and may even be able to pull off enough of the women that generally lean more Republican such as white suburban women to build a winning coalition,” said Michele Swers, a government professor at Georgetown and author of two books on women in politics.

The debate riles up Republican women sick of seeing their party tarnished as anti-women. “There’s a hypocrisy with Hillary’s gender bashing,” said Katie Packer Gage, who was Mitt Romney’s deputy campaign manager in 2012 and now runs an all-female GOP consulting firm. “She’s not the only one for equal pay for equal work. Everyone is for that.”

Republicans oppose Democratic legislation on equal pay because it could lead to more lawsuits and a boon to trial lawyers. They’ve introduced their own legislation that increases incentives for companies to provide equal pay. Those bills died, though, both in the House and the Senate at the end of the last Congress and the GOP has yet to reintroduce them again this session. Indeed, Republican men should probably not be talking about gender and Clinton at all, Gage said. “I don’t think it’s a particularly smart move for the men in our party to be leading the charge on this because it’s the gender card,” Gage said. “It’s better for women to speak out on it.”

But the GOP’s lone female presidential candidate, former Hewlett Packard CEO Carly Fiorina, has been noticeably mum on the issue. Her campaign did not respond to a request for comment. And none of the GOP’s high profile elected women have seemed inclined to wade into the debate. Meanwhile, unfortunately for the GOP, the only ones being heard on gender are Trump, McConnell and Clinton. 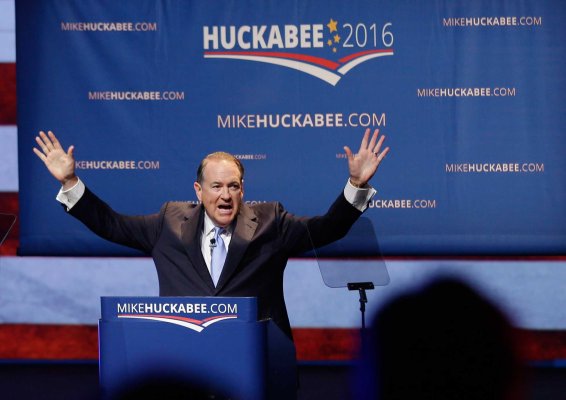 Huckabee Trolls Clintons With Web Video, Saying He is Rare Survivor
Next Up: Editor's Pick