Egypt Is Struggling to Cope With Its ISIS Insurgency

A Palestinian watches as smokes rises from an Egyptian coastguard vessel on the coast of northern Sinai, as seen from the border of southern Gaza Strip with Egypt, on July 16, 2015.
Ibraheem Abu Mustafa—Reuters
By Jared Malsin / Cairo

They have attacked on land and at sea, killing dozens of soldiers. They have assassinated a senior official in daylight and attempted to seize a small Sinai town.

The insurgents control no significant area of land, but they are far from being defeated. A season of deadly attacks by insurgents in Egypt — including those backed by the Islamic State in Iraq and Greater Syria group (ISIS) — underscores an escalating insurgency that the Egyptian state is struggling to suppress.

The surge in violence began in late June when Egypt’s chief prosecutor was killed in a car bombing in daylight in an upscale Cairo neighborhood. Two days later, the ISIS-affiliated militants launched a massive assault on military positions in north Sinai, attempting to seize control of a small chunk of territory in Egypt. At least 17 Egyptian soldiers died, although some reports placed the death toll much higher.

The attacks did not stop there. Early on the morning of July 11, a bomb destroyed part of the Italian consulate in Cairo. Another attack targeted soldiers on the Suez road. Later, Wilayet Sinai published photos of a missile hitting an Egyptian navy ship in the Mediterranean. The Egyptian military said no one died, while the insurgents claimed they killed the whole crew.

“Each attack is greater than the last one. It indicates a systematic failure, both on a strategic level and a tactical one,” said Ismail Alexandrani, an Egyptian analyst currently in Washington following a fellowship with the Woodrow Wilson Center. “All propaganda or optimistic analysis of this is just wishful thinking,” he says in a phone interview, “the worst is yet to come.”

Even before the massive June 1 assault in north Sinai, violent attacks were on the rise. In June, militants launched 130 separate attacks, according to reports compiled by the Washington-based Tahrir Institute for Middle East Policy. That number marks an increase in reported attacks since the beginning of 2015.

The most significant group behind the current wave of militancy is the Islamic State’s “Sinai Province” (Wilayat Sinai in Arabic). That group, originally known as Ansar Beit Al-Maqdis (ABM), pledged fealty to the Islamic State group in 2014. The group has been responsible for killing hundreds of Egyptian soldiers and police in recent years.

The current uptick in the insurgency began in the summer of 2013, after the military deposed President Mohamed Morsi, an Islamist elected the previous year. Hundreds died and thousands more have been jailed and injured in a state clampdown against the Muslim Brotherhood and other Islamist groups.

The government has indicated that their response to the current violence will feature more restrictive measures. These include a proposed law that would criminalize media reporting that contradicts official accounts. The legislation initially included a two-year jail sentence for such reporting, but the draft was revised, imposing a fine of 200,000 to 500,000 Egyptian pounds ($25,530 to $63,840).

Reeling from the violence, the government is also making internal changes. Interior minister Magdy Abdel Ghaffar carried out a major reshuffle of security officials, replacing 24 heads of security, according to the state newspaper Al-Ahram on Thursday. The security chiefs in greater Cairo will remain in place, while north Sinai will receive a new security director.

Arrayed against the state are multiple militant groups with varying capabilities. The Sinai Province remains the most potent, claiming responsibility for the north Sinai offensive, the Suez road attack, and the attack on the naval ship. The group did not however claim the assassination of the chief prosecutor, Hisham Barakat.

According to news reports, Egyptian security officials suspect that a former special forces officer turned militant leader masterminded the attacks. The former commander, Hisham Ashmawy, recently released an audio recording in which he urged a holy war against the government.

Until recently, Ashmawy was thought to be imparting his military expertise to the Sinai Province group, but in the new recording, Ashmawy indicates he is affiliated with a new group Al-Murabitoun, aligned with ISIS’ predecessor and main rival in the jihadist universe: Al-Qaeda. The recording, posted on YouTube, opens with a video of Al-Qaeda leader Ayman Al-Zawahri.

If authentic, the message from Ashmawy illustrates the depth and complexity of the problem facing Egyptian authorities already locked in battle with the ISIS-linked Sinai Province. It could also signal divisions within the insurgency in Egypt that map roughly onto the global rivalry between ISIS and Al-Qaeda.

“Ashmawy did likely train many militants but it seems he was among the dissident voices against the ISIS pledge of allegiance,” said Mokhtar Awad, a research associate tracking Egyptian militant movements at the Center for American Progress in Washington.

“Much of his military knowledge has however been absorbed by ABM, so his departure may not necessarily translate into a blow to their capacity as they now have other (likely ISIS trained) commanders,” Awad said in an email.

Egypt has a history of military officers joining the ranks of Islamist militants. The assassination of president Anwar Sadat in 1981 was carried out by a group of officers led by Abboud al-Zomour and Khaled al-Islambouli. In the current conflict, Ashmawy is not the only former military officer to defect to the insurgents. By all accounts their numbers are small, but analysts say they could be responsible for transferring knowledge to the militants.

Egypt’s central government has battled militancy in the Sinai for years. The peninsula, which borders Israel and the Gaza Strip, has been marginalized in the Egyptian system since Israel withdrew its occupying troops following the 1979 peace accord. Local Bedouin citizens are barred from joining the military and the people of the Sinai have been sidelined from much of the region’s economic development over the last three decades.

Regardless of the ferocity of the recent attacks, analysts also point out that the ISIS presence in Egypt looks different than it does in Syria and Iraq. The so-called Sinai Province controls no territory of any significance. Unlike the Iraqi army which fled advancing ISIS fighters last year, the Egyptian military reportedly managed to retake the town of Sheikh Zuwaid during the July 1 onslaught.

“Wilayet Sinai has and always will be a Sinai based, Sinai focused group. It can be contained. There is a reason why it is called Wilayet Sinai and not Wilayet Egypt,” says Awad. “Even ISIS central recognizes that the group has a limit. But with the ISIS pledge the group is caught between being a local actor and part of an international project.” 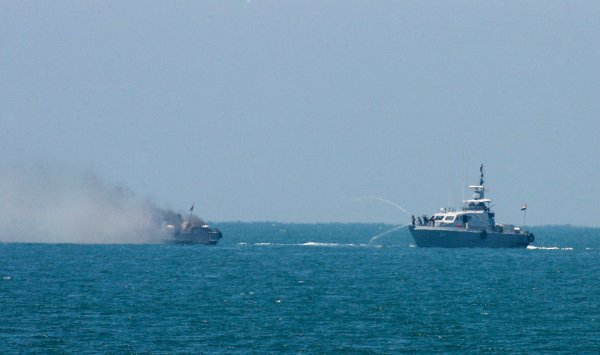