Our Young Men Are Telling Us They Can't Cope

Ideas
By Stephen and Joyce Singular

On the day that Aurora theater shooter James Holmes was convicted on two dozen counts of first-degree murder, a 24-year-old man opened fire at few states to the east in Chattanooga, Tennessee, leaving five military personnel dead. That same day Dylann Roof was given a trial date. The coincidence of tragedy seemed to send a message: we’re producing twenty-something, male mass killers faster than we can prosecute them. Since the 1960s, mass shootings have risen 10,000 per cent. And since taking office in January 2009, President Obama, wearing an expression of baffled and profound sadness, has stood before our nation fourteen times and addressed the latest massacre. Why is this happening now?

Every one of these shootings has at least one thing in common. The killer, struggling with personal crises, decides that the only answer to his dilemma is to unleash a horrific act of violence. The Chattanooga shooter, Mohammod Youssuf Abdulazeez, had recently blogged that “life is short and bitter.” He felt trapped inside a “prison.” He was depressed and didn’t know how to cope. In the spiral notebook that James Holmes sent to his therapist a few hours before going into the theatre with a semi-automatic weapon, he listed the things that he’d turned to help himself and his “broken brain”: going into graduate school to study neuroscience and his own mind; getting a girlfriend in the winter before the massacre; and putting himself into therapy so that a mental health professional could give him her feedback (when he repeatedly told Dr. Lynne Fenton that he wanted to kill “a lot” of people, she prescribed Zoloft).

He took the medication and when it failed to alleviate his symptoms, she doubled and then tripled the dose. When that failed, he began buying guns and ammunition. Based upon what we know today, at no point in his treatment was there any serious discussion about the emotional underpinnings of his torment and gathering rage. Meds were the answer, the system told him, until they weren’t anymore — with the rest of us left to deal with the consequences.

In the weeks leading up to the massacre, Holmes communicated often with his parents in Southern California. He told them what he was buying at the grocery store and eating for dinner. He didn’t say anything about collecting an arsenal and planning mass murder because he didn’t want them to think he was “weak.” He couldn’t show them any vulnerability, so he showed them mass violence. Throughout the trial, his mother and father sat about ten feet behind him with expressions of perpetual shock and grief — for their son, for the victims and for themselves. They didn’t know he wasn’t coping because he was afraid to tell them. They weren’t aware that in his notebook he’d written:

“Violence is a false response to truth while giving the illusion of truth… I have spent my entire life seeking the alternative so that the question of how to love and what to live for may be addressed.”

But he couldn’t answer that question on his own and when he looked for help he couldn’t find it. James Holmes’s state of weakness is our collective state of weakness and confusion as a nation. We force children to learn math and science, but what about penetrating their own their feelings? How many times during the day do you confront your emotions or use some coping mechanism to resolve conflict?

For the past fourteen years, the United States has taught itself and the world that the solution to complex political problems is violence — mass violence that once unleashed will bring those problems to an end. There is no evidence that this is true. Our young men are telling us —screaming at us — that they don’t know how to cope with themselves and they’re turning to the only answer they see around them. When do we start to teach young people how to confront their emotions, how to resolve conflict without violence, and how to see what their real strength comes with acknowledging inner pain and starting to work with it instead of denying it?

Our country has gone through a long struggle to accept gay marriage and other complex social issues. We’re at the very beginning of a similar struggle to understand ourselves emotionally and to find solutions. Our young men are trying to tell us something critically important. It’s time to listen.

Stephen and Joyce Singular are the authors of The Spiral Notebook: The Aurora Theater Shooter and the Epidemic of Mass Violence Committed by American Youth. 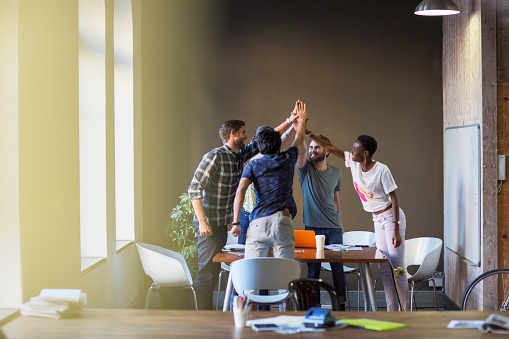 Study: You Should Be Nicer to Your Colleagues
Next Up: Editor's Pick